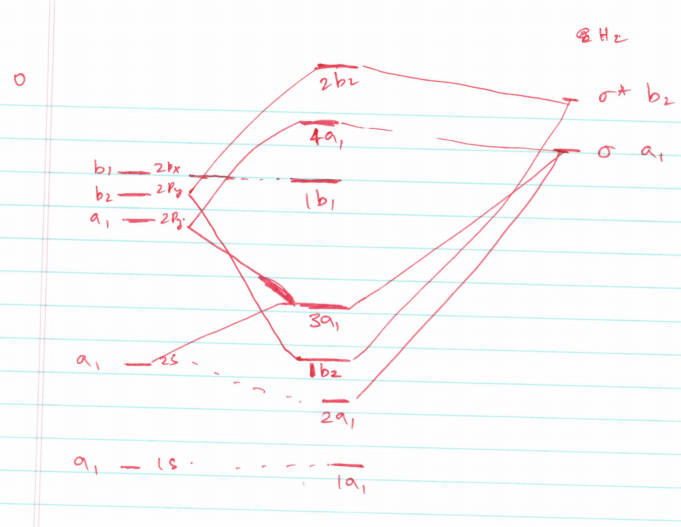 There is only one non-bonding orbital ($1b_1$) in which the AOs of hydrogens do not participate. Where is the second lone pair orbital of water?

General Chemistry perspective: Looking at the molecular orbitals of water, we can see that the oxygen is $\mathrm{sp}^3$ hybridized.

No. One could say that, but $\mathrm{sp}^2$ is equally possible. In fact, it may seem more likely, we’ll get to that in a second.

Yes, and you did a nice job of drawing them.

There is only one non-bonding orbital ($1\mathrm{b}_1$) in which the AOs of hydrogens do not participate. Where is the second lone pair orbital of water?

And this is where it gets interesting.

I’ll once again point to Professor Klüfers’ web scriptum for the basic and inorganic chemistry course in Munich, section about localising molecular orbitals. If you don’t understand German, all you need to do is look at the pictures and understand that wenig means a little in this context.

Now why is $\mathrm{sp}^3$ a bad description? You see, we arrived at one lone pair that is definitely $\unicode[Times]{x3C0}$-shaped or p-shaped. The second is somewhat p-ish but also somewhat s-ish, so maybe some sp-hybrid. But there is no mistaking that $1\mathrm{b}_1$ is in no way influenced by all the others. It is antisymmetric to the $\ce{H-O-H}$-plain of symmetry while all the others are symmetric. $\mathrm{sp}^2$ describes this a lot better.

Although this is an old question with an accepted answer, I think it's worth providing a second perspective rather than continuing extended discussion in the comments.

First off, let's consider the purpose of even considering hybridization. The purpose of constructing hydrid orbitals is to create localized bonding orbitals and to see how they can be formed as linear combinations of atomic orbitals. By determining the contribution of different s and p orbitals to the hybrids, we can draw some conclusions about the bonding in a molecule.

Since the question is about the nonbonded orbitals, however, we need to complete the process and create two equivalent localized non-bonding orbitals. These necessarily are comprised of the MOs we didn't use to make the bonding orbitals.

The problem with this approach is that it's hard to deduce the quantitative contribution of the atomic orbitals to either the localized bonding or the localized non-bonding orbitals without extensive calculations, so we don't know how well this picture matches to the general chem "water has $sp^3$ hybrid orbitals" description. I've been misled myself trying to draw conclusions from this approach (as evidence by some wrong answers I've written on this site).

Instead, it's much simpler to build the localize hybrid orbitals from atomic orbitals independently of the delocalized orbitals.

When doing so, Coulson's Theorem is very helpful for translating a bond angle into a degree of hybridization. For two equivalent bonds (as the O-H bonds here are expected to be) with a bond angle $\theta$, the hybridization of the localized bond orbital is given by $sp^\lambda$ where $$\lambda = -\frac{1}{\cos\theta}.$$

Applying this to the known bond angle of water, we find that the O–H bond orbitals are $\approx sp^4$, that is, 80% p and 20% s. So they are slightly more p in character than the simple $sp^3$ model (ie 75% p). This is consistent with our intuitive expectation that a bond angle less than 109.5 indicates more than 75% p character.

The reason that these values differ from the Gen Chem simplification is that the Gen Chem approach treats the bonding and non-bonding orbitals as equivalent and provides only a single hybridization value. Is that incorrect? Yes. Does it really matter? Probably not. It's a halfway decent approximation, and most Gen Chem texts follow shortly with a discussion of $\ce{H2S}$, where the smaller bond angle indicates even further deviation from $sp^3$, to the point that the increased p contribution is far too great to be ignored.

One last important point is that the electron density overall on the molecule that is described by these localized orbitals is necessarily identical to that total electron density described by the delocalized orbitals. Much as we can describe the number 12 as 1+2+4+5 or as 3+3+3+3, the two sums are equivalent even though the component parts are completely different from each other.

Not the answer you're looking for? Browse other questions tagged water quantum-chemistry computational-chemistry theoretical-chemistry group-theory or ask your own question.

3
What do the molecular orbitals of a single water molecule look like?
1
How to determine the shape of hybridized atomic orbitals in VB theory?