Is it possible to make deuterated organic compounds?

Deuterium occurs at around the 0.02% level in nature (natural abundance level). So all compounds that contain hydrogen will already contain a low level concentration of the deuterated isomer(s). So in fact, deuterated compounds do exist in nature.

Despite this low level of natural deuterium incorporation, the deuterium can still be detected by various spectroscopic techniques (mass spectrometry and nmr for example).

Further, organic compounds can be synthesized with deuterium in specific locations. These deuterated compounds are still considered organic compounds. Since deuterium is a stable nucleus (e.g. does not undergo radioactive decay), the compounds containing deuterium are also stable. Because the $\ce{C-D}$ bond is a bit shorter and therefore a bit stronger than the corresponding $\ce{C-H}$ bond, there is an isotope effect in reactions where these bonds are broken. Because the $\ce{C-H}$ bond is weaker, it will break up to 7 times faster than the corresponding $\ce{C-D}$ bond. This can have a significant effect on biological processes. 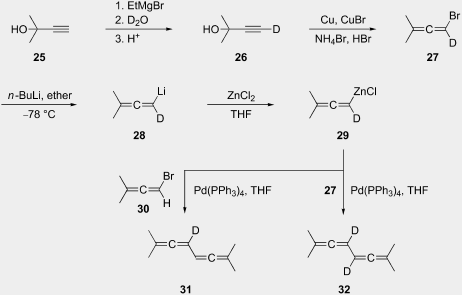 Specifically deuterated compounds are widely used in many areas of research and industry.

Not the answer you're looking for? Browse other questions tagged organic-chemistry isotope or ask your own question.

26
What makes diazo compounds so unstable and explosive?
7
Why does this compound only have one pair of enantiomers?
5
Order of reactivity of carbonyl compounds towards nucleophilic addition
0
Acid-Base determination of organic compounds
24
Are stronger bonds always shorter?
2
Reduction of Organic compounds
2
What are the limits of size differences in a host–guest complex?