When can we say that such metal forms a complex?

For example in $\ce{Pd(PPh3)2Cl2}$, there are two neutral ligands, $\ce{PPh3}$ that interact with the metal center through dative bonds. There is also evidence that the $\ce{Pd-Cl}$ bond is more covalent than ionic, since palladium forms a complex ion $\ce{PdCl4^-}$ with chlorine.

Palladium acetate man seem like a more clear cut case until you look at the crystal structure. Each acetate anion bridges two palladium, centers in a polymeric chain: 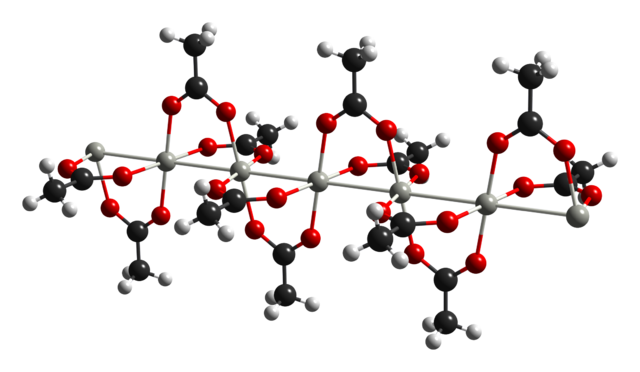 It is worth noting that IUPAC does not recommend using the term complex to describe these compounds given that complex can refer to a number of other, more loosely bound, species. IUPAC prefers coordination entity, though I have never heard a practicing chemist or seen a textbook use that phrase.

Not the answer you're looking for? Browse other questions tagged coordination-compounds transition-metals or ask your own question.

3
Does sodium form complexes like transition metal ions?
2
High or low spin complex of Zn2+ and Ti3+
8
Why do transition metals form particularly stable complexes?
0
What is the binding mode of the ligand in complexes with quadruple metal-metal bonds?