What is the difference between steric strain and torsional strain?

I know that in ethane, the extra energy present in the eclipsed conformer is caused by torsional strain.

What is the difference?

Here is the more detailed version.

Lets consider an ethane molecule. The C-C sigma bond is free to rotate and in principle there are an infinite number of possible conformations. However only 2 are significant, these are staggered and eclipse conformations. Different conformers are usually drawn as Newman projections as they can easily be compared with each other. Below are the Newman projections for the eclipsed and staggered conformer:

So what is torsional strain? The reason for the eclipse conformer being higher energy than any other conformers is due to the destabilising electrostatic repulsion between the electron pairs of the C-H sigma bonds on the two carbons. Furthermore, there also exists a stabilising feature which is greater in the staggered conformer. In the staggered conformer there is a constructive orbital interaction involving the bonding and anti-bonding MOs of the adjacent H atoms. This results in hyper conjugation which stabilises the compound.

Now lets consider butane. Rotation of the $\mathrm{C_2-C_3}$ sigma bond also lead to infinite possible conformers. However there are 4 main conformers shown below: 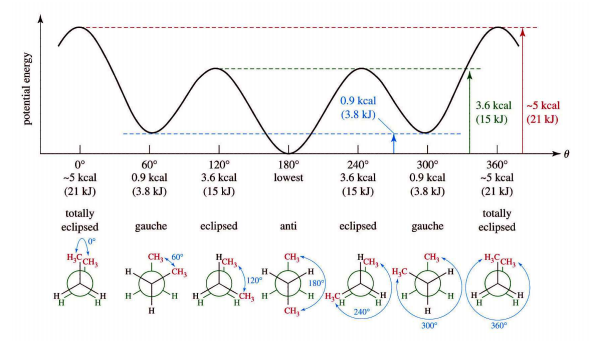 Here there are 2 types of eclipsed conformers which are the least stable of the conformers. The most unstable one is known as the eclipsed syn form. The syn form is approximately $\mathrm{20~kJ~mol^{-1}}$ higher in energy than the staggered conformer. The reason for this can partly be attributed to torsional strain as there is repulsion between the electrons in the sigma bonding orbitals. However also it can largely be attributed to the repulsion of the two relatively bulky methyl groups as they become too close to each other and there isn't enough space for them.

This repulsion is known as steric strain. Therefore steric strain can be define as the repulsion which occurs when non-bonded groups which are not directly bonded approach each other too closely. This repulsion only exists for bulky substituents, such as methyl or ethyl groups. So in ethane there is no steric hindrance as the hydrogen atoms are not that bulky.

For simplicity's sake, torsional strain is defined as as the strain experienced by the bonds when conformations are not staggered. So, at any angle other than 60, 120, or 180, there is torsional strain. Additionally, torsional strain can only ever exist in atoms separated by only three bonds.

Therefore, the hydrogens in ethane only ever experiences torsional strain, and it is zero (technically minimized) when it's staggered.

In the butane below, there is torsional strain between the two central carbons and hydrogens from each central methylene group. However, atoms separated by four or more bonds experience steric strain. Steric hindrance will never be zero, but it can be minimized when the atoms are separated by as much space as possible.

4
Conformations of butane
8
Why does the Wurtz reaction form such an unstable compound with torsional strain?
0
What is torsional strain?
9
Why do sp2 carbons tend to prefer eclipsed conformations whereas sp3 carbons prefer staggered
2
Calculation of the lowest energy conformation with a webbased solution or freeware
10
Why is the eclipsed conformer more stable than the bisected conformer in 1-butene?
2
Is there a gauche interaction between C-3 and C-6 in cyclohexane?