How does absorption spectroscopy work?

So a beam of white-light photons passes through a gas and various photons, having exactly the same energy as the gas's molecular energy transition state deltas, get absorbed. We then get a characteristic absorption pattern. But wait a minute, don't the energised electrons fall back to their ground states within a nanosecond and create photons of precisely the same energy as those that caused the disturbance? How come we still see the absorption band?

In an absorption experiment a collimated beam of light is passed through the sample. The intensity of this is measured before and after the sample. The absorption is measured as optical density which is $D=[c]\epsilon _{\lambda} l$, where $[c]$ is the concentration, $\epsilon_\lambda$ the extinction coefficient at wavelength $\lambda$ (a measure of the strength of absorption), and l the path length through the sample. At each wavelength the measured light intensities are $I=I_0\exp(-D)$ where $I_0$ is the initial intensity. This is called the Beer–Lambert law.

Now as you mention the sample is placed into its excited state where it remains for some period of time. This depends on the molecule being studies but may be from picoseconds (relatively rare) to several nanoseconds to microseconds (also rare). In an absorption spectrophotometer the light intensity used is low, so the excited state population is always very small. As any fluorescence produced is emitted over $4\pi $ radians (in solution) the amount captured by the detector will be small, just on geometric grounds as the detector is placed some distance away from the sample and the light passes through slits before entering the detector.(The slits & grating give spectral resolution). Also note that the fluorescence is mainly at a longer wavelength than absorption but the zero zero line in absorption and emission can overlap. The geometric reason just given suffices to make absorption accurate even in this case.

In laser experiments the situation can be different, particularly when pulsed lasers are used. It is quite easy to observe 'gain' in the sample, this means that transient signals that are more intense than the measuring (probe) beam are observed. This is due to stimulated emission caused by the probe beam. It is also quite easy to see amplified stimulated emission (ASE) from a cell containing a fluorescent dye if the laser beam is focussed.

An explanation as to why stimulated emission is not normally observed in an absorption experiment and why fluorescence is observed under similar conditions is given below.

The ratio of populations is also given by the Boltzmann distribution, also at temperature $T$

Combining these last two equations and solving for $\rho$ gives

and is the number of radiation modes per unit volume per unit frequency.

This relationship means that the ratio of induced to the spontaneous emission rate (leading to fluorescence) is equal to the number of photons in this mode. The figure shows that in the visible part of the spectrum, $\approx 400$ to $700$ nm at at thermal emission at room temperature the number of photons mode is somewhere between $10^{-10}$ and $10^{-100}$, the exact number does not matter much as it is so small. Thus this means that the spontaneous emission rate (i.e. fluorescence) far exceeds that of stimulated emission. Under normal circumstances where the radiation is weak, as in a spectrophometer, and $N_2 \ll N_1$, the linear absorption spectrum is obtained. If many photons can be concentrated into a few modes, then for these modes, stimulated emission may exceed spontaneous emission; the result is a laser amplifier. 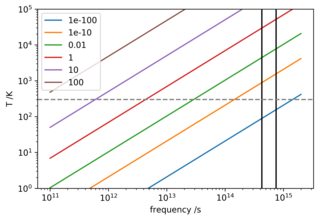 The figure shows the average number of photons/ mode with temperature, assuming Planck black body distribution vs. the photon frequency. The vertical lines are approximately the range of visible light. The horizontal dashed line is at $300$ K.

First consider only a two state system with states A and B: Before radiation they are in equilibrium and we set the groundstate energy of A to zero. This means ratio of occupation between the states is just: $$ p_B=\exp(-E_B/(k_\mathrm{B}T)) $$ You excite from state A to state B with the right frequency/energy and disturb this equilibrium. If we assume a steady beam, we can apply Einstein radiation theory. You will see that there is spontaneous and stimulated emission. Stimulated emission is coherent and anisotropic and leads to your paradoxon. When looking at the equations in the wikipedia link you see that it appears the more the equilibrium is distorted. If you have an occupation ratio of one only stimulated emission is happening. (In lasers you are using exactly this property)

Spontaneous emission is isotropic. So if you put your detector in a sphere around your absorbing molecule you get again your paradox. Usually you put the detectors parallel to the the beam in a small area. The ratio between the detector area and the virtual sphere with the same distance/radius gives the fraction of spontaneous emission that reaches the detector. This applies to all quantum states and is true for rovibrational, UV-Vis... spectroscopy.

Now since you asked for fluorescence in your comments. This is more involved since you need to know about selection rules and at minimum a three state system. Especially it is not quite connected with your "paradoxon". A good start would be Jablonski diagrams.

The absorption spectroscopy you are referring to is a steady-state technique, which means that a continuous light source is used for the excitation. Usually, this is a lamp in a UV-VIS molecular spectroscopy experiment.

To answer your question, in a steady-state technique the medium (atoms or molecules) that you want to measure is constantly excited by the light source during the experiment, i.e. the electrons are always in the excited states and the overall process results in an absorption, i.e. attenuation of the light excitation.

The experiment where you should be concerned about excited electrons falling back to the ground state is a time-resolved one. Here the light source that perturbs the medium is pulsed (usually a laser with pulse duration ranging from ns to fs) and the medium is excited very shortly (depending on the pulse duration) , than another light pulse is used to follow the evolution of the excited states, that in the easiest case consists in excited electrons going back to the ground state.

Not the answer you're looking for? Browse other questions tagged physical-chemistry quantum-chemistry spectroscopy spectrophotometry or ask your own question.

2
Is Beer-Lambert law also valid for fluorescence and luminescence?