Why do self-replicating molecules dissociate?

I am new to chemistry (have only done a GCSE) so I apologize for my lack of knowledge. But I am confused about why self-replicating molecules dissociate.

It is my understanding that a self-complimentary molecule can gather the parts needed through bonding to create another copy of itself on its recognition surface. Once the new molecule is constructed I am unsure why it would then depart from the original one during this dissociation phase. Why would all of these bonds suddenly break apart? What exact mechanisms are involved in this process?

Well, allow me to answer since I worked on self-replication during my master’s thesis.

The thing about all these associationen is that there is always an equilibrium to be considered. That is also true for chemical reactions: Technically, every reaction is at an equilibrium of some kind.

or in the special case of associations:

For nomal bond-creating and bond-breaking reactions, the energy involved in the whole process is relatively large — breaking a carbon-carbon bond requires approximately $400\,\mathrm{\frac{kJ}{mol}}$! However, if we are merely talking about association as in complexation, the energies involved (i.e. gained or lost) are rather small. This es especially also true for the activation energy, meaning that forming and dissociation of such complexes are rather fast and at equilibrium the whole time. It is important to realise that the bonds formed for the self-replicating complex are all intermolecular and only the bond between the fragments is a covalent, intramolecular bond.

Let’s take a look at an exemplary self-replicating complex:[1] 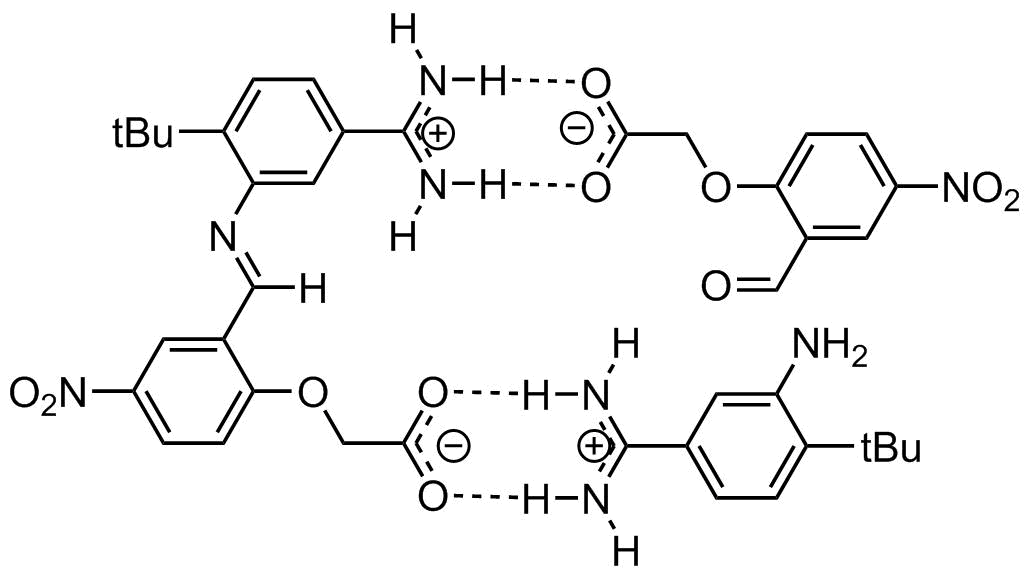 On the right half of this picture we have the two fragments, on the left we see the template. All solid lines are actual (intramolecular) bonds while all dashed lines are intermolecular associations — in this case hydrogen bonds. The intermolecular dashed interactions build up and break down rapidly with low energy barriers. The new intramolecular bond is formed between carbon and nitrogen on the aromatic rings (not formed on the right, formed on the left) and represents the energy liberated in the reaction. This one is only formed, not broken.

To form the bond, the two fragments need to linger on the template long enough. That is generally no problem, despite rapid association and dissociation.

In fact, form too stable of a complex (i.e. one that won’t dissociate quickly) and you have effectively eliminated the complex’ ability to self-replicate.

Not the answer you're looking for? Browse other questions tagged reaction-mechanism bond intermolecular-forces or ask your own question.

7
Why aren't there any triangular molecules?
6
Why don't molecules of ionic compounds exist?
1
Entanglement of large molecules
1
Molecules made of molecules?
9
Why and when are bonds broken
0
What would be the intermolecular forces between the molecules of methanetetrol?