There are three singlet carbenes - difluorocarbene, dichlorocarbene and dibromocarbene. Which has the strongest carbon halogen bond?

Obviously backbonding is a point to be considered, as carbene is an electron deficient species. As fluorine is the most easiest to overlap with, the $\ce{C-F}$ bond will be strongest.

But I am not able to get that whether it is possible for the singlet carbene to overlap or share electron density with empty d-orbitals on chlorine and bromine atoms?

And which is more probable, backbonding from halogens to carbene empty orbital, or the other way round (from carbene filled orbital to vacant d-orbitals)?

Below is the picture electrostatic potential of on the left a singlet carbene with doubly occupied sp2 orbital and the right triplet carbene. 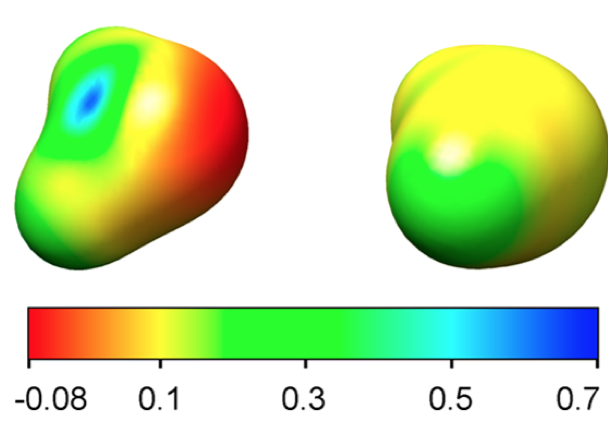 It can be argued in many ways how a halogen stabilizes the singlet state of carbene.

Though the second one is usually used, I suggest you follow the first (more physical). Adding electron negative substituents increases the s character of the doubly occupied sigma in-plane orbital of carbene stabilizing it, significantly decreasing the energy of the system. Following this concept you can see that flourine should provide the maximum stabilization and so on.

Not the answer you're looking for? Browse other questions tagged organic-chemistry bond radicals carbene or ask your own question.

5
Is a carbon-fluorine bond stronger than a carbon-chlorine bond?
17
Orbital correlation diagram for the cleavage of cyclopropylmethylene carbene
4
Are the Phosphate and Sulfate ion diagrams with double bonds an invalid picture?
6
Relative acidity of p-chlorobenzoic acid and p-flurobenzoic acid
3
Choose the molecule with the strongest bond
2
Why do PBr3 and PCl3 have larger bond angles than PH3?
0
Which is more stable? CF2 (singlet) or CF2 (triplet)
0
How is carbon-halogen bond broken during Finkelstein reaction?