Do vinyl cations adopt a classical or non-classical structure?

Whilst reading this question today, I remembered something that I had seen previously here. In the second linked question, @Martin provided a reference to suggest that vinyl cations actually adopt a non-classical structure with $\ce{sp}$ hybridization and a bridging hydrogen, as shown below:

What is the correct structure of a vinyl cation? Does it depend on what the substituents are? For example, in the first linked question, do the two cations (shown below) actually equilibrate to the same non-classical structure?

TL;DR: there have been many theoretical investigations of the relative energies of these two forms for the parent vinyl cation with more recent work indicating that the bridged form is slightly more stable (by about 1–3 kcal/mol)4,5. This prediction has received support from recent experimental work as well6.

Taking such relatively small energy differences into account I would not be surprised if the situation is reversed with a particular substituent. Thus, answering the second part of the question ("Does it depends on what the substituents are?") requires high-level calculations for a wide variety of different substituents which seems to be absent in literature yet.

First note that (give Marko a credit for paying our attention to that), as it is mentioned in Stang's "Vinyl Cations" book, the bent $\mathrm{sp^2}$-hybridized structure with a $\ce{C=C-H}$ bond angle of 120° (OP calls it "classical") is about 50 kcal/mol higher in energy than the linear $\mathrm{sp}$-hybridized form in all of the theoretical calculations.

These calculations confirm the organic chemist's intuitive and qualitative feeling that carbenium ions prefer a trigonal planar geometry with an empty p orbital and that it takes energy to bend the methyl cation from its low-energy planar form. 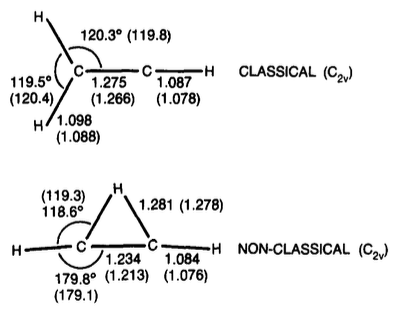 So, Stang's "Vinyl Cations" references a CI/DZP study of the vinyl cation by Weber, Yoshimine, and McLean 1 as the most recent ab initio correlated calculations published at the time the book was written (the late 70s), so I'll start a review from this study.

It is was found that the linear and bridged conformations have energies equal to within 0.01 kcal/mol with the later being lower in energy. However, such a small difference is below the accuracy of the CI/DZP level of theory, and thus, the authors didn't claim that the bridged conformation is more energetically favourable, just that it can be such ("probably" is the key word in the quote from the paper below).

While our CI calculation shows the linear and bridged conformations to have energies equal to within 0.01 kcal/mol, we clearly cannot claim this absolute accuracy. In fact, taking into account basis set deficiencies, both in the one- and $n$-particle spaces, along with optimization effects as discussed above, we interpret our calculations to predict the relative energies of the two structures to be within 1–2 kcal/mol with the bridged structure probably having the lower energy.

Besides, note that in the study the geometries have been optimized at the SCF level rather than at the correlated while CI calculations were done at the SCF optimized geometries. Taking into account that correlation effect were found to have major impact on relative stability of the two forms as mentioned in the study, it is especially interesting to look at the results obtained by Raghavachari, Whiteside, Pople, and Schleyer2 who optimized the structures not only at the HF/6-31G* but also at the MP2/6-31G* levels as well as did more high-level correlated calculations (MP4) with a bigger basis set (up to 6-311G** of TZP quality).

For the bridged structure the $\ce{C-C}$ bond length was found to increase from 1.21 Å at HF/6-31G* to 1.23 Å at MP2/6-31G* while the distance of the bridging hydrogen to the middle of the $\ce{C-C}$ bond stays the same (1.18 Å). For the classical structure the authors report no significant changes in the geometry. With respect to the relative stability it was found that use of the MP2 geometries results in a slight additional stabilization to the bridged form: the MP4(SDQ)/6-31G**//MP2/6-31G* energy difference is 1.3 kcal/mol while the MP4(SDQ)/6-31G**//HF/6-31G* energy difference is only 0.6 kcal/mol (in both cases in favour of the bridged form).

The authors also mention that these final results are quite in line with the CEPA study by Lischka and Kohler3 done using a comparable basis set: the Lischka and Kohler geometries were very similar to the HF/6-31G* geometries obtained in the study and the bridged form was found to be 4.0 kcal/mol lower in energy than the classical form as well.

A further study done by the Pople group is also is in agreement with the findings quoted above: the bridged form predicted to be more stable by 3.1 kcal/mol (including zero point energies)4. А study by Lee and Schaefer5, though, reports a somewhat lower difference.

Our best strictly ab initio estimate of $\Delta E$(classical-non- classical) for $\ce{C2H3+}$ is obtained by adding the above 0.29 kcal correction to the 0.68 kcal difference from CISDT. In this manner, $\Delta E$ is predicted to be 0.97 kcal/mol. We estimate that a proper variational treatment of quadruple excitations might increase this $\Delta E$ value by perhaps 0.5 kcal/mol.

Not the answer you're looking for? Browse other questions tagged organic-chemistry molecular-structure carbocation or ask your own question.

25
Why are vinylic and arylic carbocations highly unstable?
28
Which of the following is the more stable carbocation?
13
Are carbocations necessarily sp2 hybridized and trigonal planar?
28
Carbocation stability order
2
Organic chemistry, hybridization concept