Aldehydes and ketones have electrophilic centres at their carbonyl C, since the carbonyl O polarises the bond and attracts electron density towards itself on account of its high electronegativity. But despite this electron density, the oxygen atom hardly ever acts as a nucleophilic centre. If at all, it is the alpha C, which in enols and enolates acts as a nucleophile. I only know of the Wittig reaction in which the O also reacts with the reagent (the P atom in this case). Is there any reason for the low reactivity of the oxygen? It is joined to C with a pi bond, which in any case is easy to break on attack by a reagent.

The carbonyl oxygen can act as a nucleophile but it is strongly dependent on the conditions of the reaction.

Enolates can react as a nucleophile through either the $\alpha$-carbon or the oxygen. 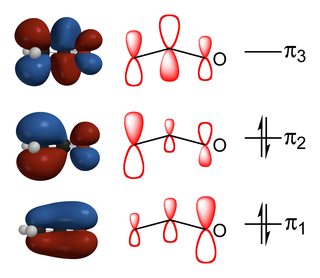 This thinking can be extended to other electrophiles. Many hard Lewis acids such as $\ce{R2BCl}$ and $\ce{R3SiCl}$ (credit to @Jan for pointing this out) will give almost exclusively oxygen substituted products.

Why does this affect the regioselectivity?

Traditionally, the ratio of carbon- to oxygen-substituted products is explained through "hard–soft acid–base (HSAB) theory". Using this model, the outcome depends on the balance of two factors, namely the orbital interactions and electrostatic interactions between the reactants.

As can be seen from the diagram above, the HOMO of the enolate has the greatest contribution from the $\alpha$-carbon and so reactions which are controlled by orbital energy factors take place through there. Conversely, the greatest negative charge is on the oxygen due to its greater electronegativity and so if the reaction is controlled by electrostatic factors then it will take place at the oxygen.

This allows us to explain the effect of changing the electrophile from $\ce{CH3I}$ (mainly C-substituted product) to $\ce{CH3OTs}$ (mainly O-substituted product). The increasing electronegativity of the substituent increases the positive charge on the methyl carbon, meaning that electrostatic interactions become more important in the case of $\ce{CH3OTs}$. Conversely, the $\ce{C-X}~\sigma^*$ orbital (the LUMO of the electrophile) will be lower in energy in methyl iodide than in methyl tosylate due to the poorer energy match between the $\ce{C}$ and $\ce{I}$ atomic orbitals compared to $\ce{C}$ and $\ce{O}$. This brings the LUMO of $\ce{CH3I}$ closer in orbital to the enolate HOMO, making the orbital interactions more important in that case.

Likewise, boron or silicon central atoms are small and are highly charged, and so have strong electrostatic interactions with the oxygen end of the enolate. These would be considered "hard acids", and the carbonyl oxygen a "hard base". By comparison, neutral carbon electrophiles are "soft acids" and so exhibit less affinity for the oxygen.

This explanation might suffice at an introductory level. However, in truth, the concept of HSAB theory doesn't hold up when generalised; it also ignores fundamental concepts such as whether the reaction is thermodynamically or kinetically controlled (which generally affect the reaction outcome). HSAB theory is therefore not actually the correct way to treat this issue of ambident reactivity (i.e., a species reacting at two or more different parts).

Apart from the electrophile, changing the solvent is one of the easiest ways to influence the outcome of the reaction, particularly in the case of alkylation. In polar aprotic solvents, the metal cation is strongly solvated but the enolate is weakly solvated due to the lack of acidic hydrogens on the solvent to form hydrogen bonds. In polar protic solvents, the oxygen end of the enolate is strongly solvated by hydrogen bonding which hinders reaction at the oxygen, strongly favouring C-alkylation, even with an alkyl tosylate.

Some more reading can be found here, here, here and here.

The commonplace reaction of a ketone with a Grignard reagent involves the oxygen acting as a nucleophile ... towards the magnesium.

The view from the other side

Yes, the negatively polarized carbon gets all the headlines as a nucleophile, as this is the function that ends up in the alcohol that we identify as the product after workup. The magnesium literally just comes out in the wash as a salt formed from the original halide in the Grignard reagent and the acid used in the workup.

Yet upon further review the magnesium, at the other end of that polar bond with carbon, is also there, and with its fairly high positive charge density it acts as an electrophile towards the carbonyl oxygen. The resulting addition of magnesium to oxygen contributes to the polarization of the carbonyl group and thus ultimately supports the nucleophilic attack on the carbonyl carbon:

Not the answer you're looking for? Browse other questions tagged organic-chemistry reaction-mechanism carbonyl-compounds hsab or ask your own question.

2
Why does Oxygen act as Nucleophile over here?
1
What determines whether a mechanism is nucleo/electrophillic addition/substitution?

2
What is the reason for the acidic character in phenols?
10
Why is nitrosobenzene electrophilic on O in organocatalytic oxygenations?
4
Deciding more electrophilic centre between ester and thioester for SN type reaction
0
Reagents in Krapcho's decarboxylation
5
How to make 1,1-diphenyl-1-butene from benzophenone and 1-bromopropane?
5
Why does the nitrile carbon experience more shielding than a carbonyl carbon in CNMR?
0
Birch reduction of 1,2-Cyclopentanedione and Diketones
3
The dependency on electron density in the reactivity order of electrophilic and nucleophilic additions
1
Why is aminolysis of esters never drawn with an initial protonation step?
2
Does electrophilic substitution of hydrogen by electrophiles occur on oxygen or on ring of phenol?