In most diagrams for electrophilic aromatic substitution, the following is represented: 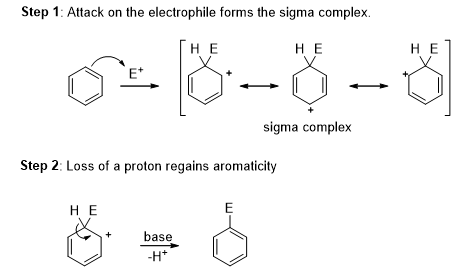 What happens to the other two resonance forms of the sigma complex? It seems like most of the time the first form is simply chosen to illustrate the return of aromaticity.

Suppose I switched the resonance structure in the second step to the following: 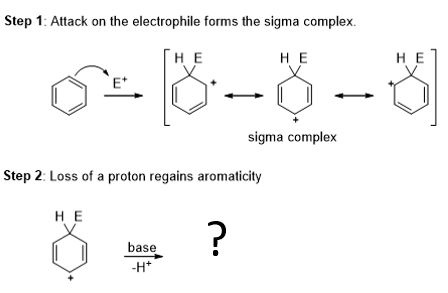 Well I'm too lazy to open up chemdraw to make a nice drawing so my handwriting will have to do. 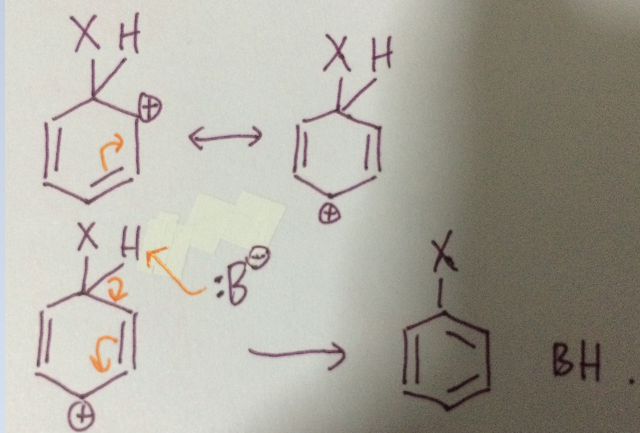 The way I see this kind of question is that, to interconvert resonance structures, electrons need to move. Of course, you'd represent that with curly arrows (top half of the picture).

Now for the deprotonation step, imagine you were using the first resonance structure. You'd draw the first two of the three arrows that I drew in the bottom half of the picture. (Or you might omit drawing the base, although for simple mechanisms like this I prefer having everything accounted for.)

What's the third arrow for (the one going from a double bond to the adjacent single bond)? It's the reverse of the arrow you used to interconvert the resonance structure. So you could think of the first two arrows being the "actual" reaction, and the third arrow being a "bookkeeping" arrow to make sure that everything ends up nicely aromatic.

Of course, that's kind of a flawed view because the reaction as shown has to have all three arrows or else you end up with a product that doesn't make sense. But using this idea of "the original reaction" + "reverse resonance arrow" works for every single instance of the question that you are asking, i.e. how to draw a mechanism involving an alternative resonance form. As long as you are able to draw arrows to show the interconversion between resonance forms, you should never run into a problem drawing a mechanism, regardless of what resonance form you use.

Now just a note on what you said - "It seems like most of the time the first form is simply chosen to illustrate the return of aromaticity." You're absolutely right about that. Using the first resonance form is just the simplest option since it involves the fewest arrows. Otherwise the writer of the book is just giving him/herself extra work... and nobody likes that.

It should be no different. If you label the carbon atoms clockwise as 1,2,3....6 starting at the ipso (or the top/12'o clock position) then as soon as the H in step 2 moves out, the bond pair would come between C1 and C2. Simultaneously, the vertical double bond (between C2 and C3) moves and comes between C3 and C4 (via resonance).

1
Understanding the mechanism of Blanc chloromethylation