Why does the chlorination of indene occur with syn selectivity in heptane?

The explanation I was given for this was that "in a non-polar solvent, the ion pair collapses quickly". What does this mean, and why is the stereoselectivity reversed, as compared to typical halogenations which proceed via a halonium ion intermediate to give anti dihalides?

When the $\ce{Cl2}$ begins to interact with the indene an initial ion pair is formed. In the case of chlorine, it is not always clear whether

[Side Note: In electrophilic bromination reactions involving alkenes, bromonium ions are very common intermediates usually leading to trans addition. However, chlorine isn't as polarizable as bromine and in this particular case with indene, the open ion is extremely stable due to its benzylic nature. Hence the involvement of only a chloronium ion is questionable in this case.] 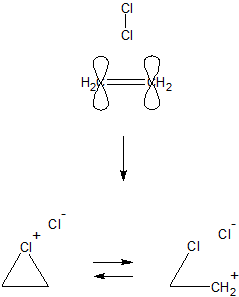 As mentioned above, ions are not very well stabilized in the non-polar solvent. As a result

If we were to repeat the reaction in a polar solvent that would allow the ions to separate and have a longer lifetime, more trans product from anti addition would be expected.

Not the answer you're looking for? Browse other questions tagged organic-chemistry stereoselectivity c-c-addition or ask your own question.

0
Why does heptane have an odour
17
Why does acetate aldol with Evans auxiliary give almost no diasteroselectivity?
10
Why does alpha cleavage occur?
1
Why does radical chlorination and bromination of propane occur at different positions?
4
Why does d/l-2,3-dibromobutane on reaction with NaI/acetone give cis-2-butene?
0
Mechanism for the chlorination of Fluorene with NCS?