Why is the van der Waals coefficient b equal to four times the volume of the particle?

In the van der Waals equation of state

the coefficient $b$ is supposed to represent the volume occupied by the particles. Why then is it equal to four times the volume and not simply the volume?

While most everything the previous answer states is correct, I would point out that taking four times the volume of a single particle has nothing to do with experiment and arises mathematically.

In deriving the VDW equation, the particles are still assumed to be hard spheres, but this assumption is corrected for with the parameter $a$.

The hard sphere approximation forbids that two particles penetrate each other's radii. Thus, we find that two spheres in closest contact are surrounded by a sphere of radius $2r$ (or the diameter of one of the original spheres).

Thus, the volume excluded by the particles from the larger sphere surrounding the two spheres shown is

which, as you point out, is four times the volume of a single particle.

The interesting thing about this is that it does not represent the actual value of $b$ for any given atom, but represents the upper bound of $b$ for any given atom. What I mean by that is, $b$ could very well be correct by calculating four times the volume, but often experiment will show that it less than the calculated value of $b$ because atoms are not hard spheres.

For instance, using helium, which is the closest we'll get to a hard sphere:

So, the experimental value of $b$ is indeed smaller, but the calculated value gives a rough idea.

The short answer to your question is because that is what the experimental data showed. The constants in the van der Waals equation were originally derived empirically for each gas. The constant $b$ happens to correlate well with four times the molecular volume for a number of gasses, which lets us calculate it for other gasses.

To answer your question a different way, let's first think about two particles that have such an attractive force that they form a chemical bond when they collide. Even these two atoms cannot get closer than a certain distance due to internuclear repulsion. Consider the following image from Wikipedia user Mark Sozoma. 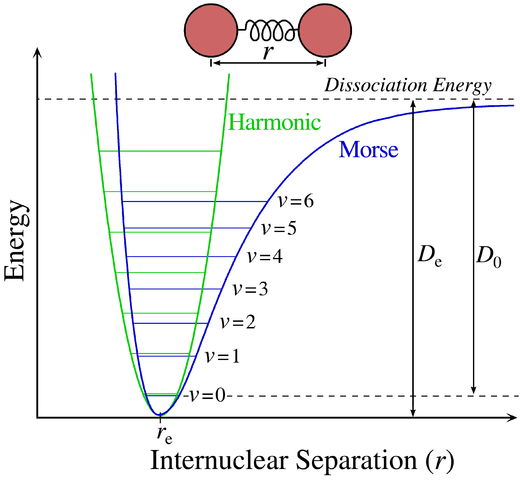 There is an optimal internuclear distance. When the atoms continue to get closer together the potential energy skyrockets.

For example, the atomic radius of a hydrogen atom is 25 pm, while the equilibrium bond length $r_e$ for $\ce{H2}$ is 74 pm. Essentially, there is one hydrogen radius between the atoms. Put another way, there are two hydrogen radii between the "surface" of one atom and the center of another. 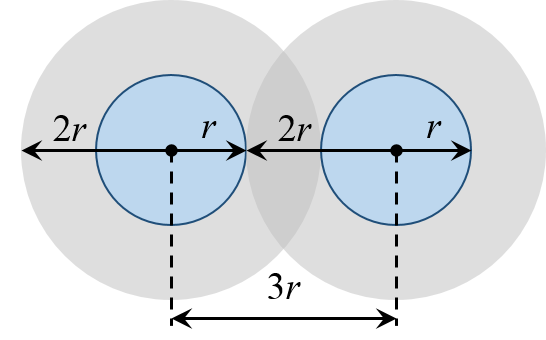 The van der Waals equation applies to gaseous particles that are not likely to form bonds to each other upon collision, though they may still have some attractive forces. Thus, it stands to reason that the internuclear distance during a collision might be larger - i.e. there might be as many as two atomic radii between the "surfaces" of the atoms.

Not the answer you're looking for? Browse other questions tagged physical-chemistry gas-laws equation-of-state or ask your own question.