Why does Brady's reagent include sulfuric acid and methanol?

I'm supposed to explain why sulfuric acid and methanol are used in combination with 2,4-dinitrophenylhydrazine to form Brady's reagent. Are they just used as a solvent system for the hydrazine? Also, wouldn't sulfuric acid react with methanol?

2,4-DNPH is usually dissolved in an alcoholic solvent, together with sulfuric acid, when used as a reagent to detect aldehydes and ketones (Brady's reagent). The sulfuric acid is a source of $\ce{H+}$, which catalyses the reaction between the hydrazine group and the carbonyl compound, as depicted in the mechanism below: 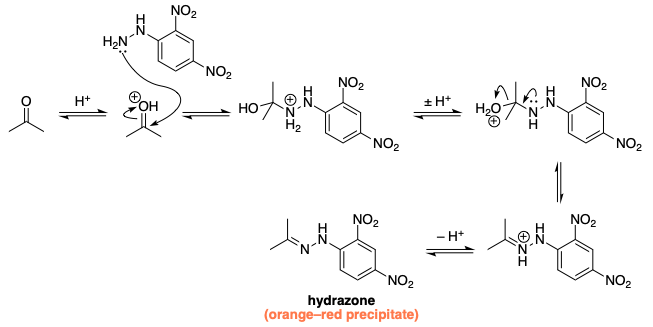 The final hydrazone product is the precipitate which signals a positive test.

The solvent used is typically methanol or ethanol. You are correct that these could theoretically react with sulfuric acid: dimethyl ether is the most likely product. However, the concentration of sulfuric acid is typically not sufficiently high, and these side reactions do not take place.

2,4-Dinitrophenylhydrazine is available as a powder, synthesised from hydrazine sulphate and 2,4-dinitrochlorobenzene (Wikipedia).

Brady's reagent is prepared by dissolving the powder in a solution of methanol and concentrated sulfuric acid.

Although sulfuric acid and methanol react, the reaction is not 'big enough' to interfere with the 2,4-DNP reaction.

1
What is true about this reaction involving hydroxy carboxlic acid?
17
How does sulfuric acid dehydrate sugars?
12
What are the pros and cons of using Gilman reagent over Grignard reagent to synthesize a hydrocarbon?
8
If glucose can react with phenyl hydrazine to form osazone why can't it react with 2,4-DNP to give positive test?
7
Mixing naphthalene, formaldehyde and sulfuric acid (Marquis reagent + naphthalene)
8
Preparation of picric acid
11
Ambigious nature of aldehydic group in glucose
14
What is the significance of the 2 and 4 positions in 2,4-DNP?
2
Ester as a side product in the synthesis of bromoalkane from alcohol. Is it correct?
3
Will PAEK polymers hydrolyze in concentrated sulfuric acid?