Work done by the System

In thermodynamics work is defined as $~-p_{ex}\Delta V~$ for an ideal gas. If the total work is a negative value, that is in case of expansion of gas, we say that the work is done by the system and is negative.

Well, think of a gas that is expanding against a piston shown below: 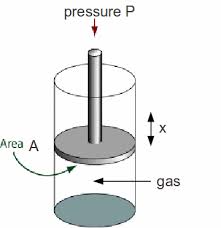 We want to find the total work which is given by: $$w = F\Delta d$$ So we need to know what is the force that is applied by the gas onto the piston. To do this, we must realise that, the force that is stopping the gas from expanding freely into the atmosphere is the external atmospheric pressure. It is this pressure which is pushing downwards onto the gas, preventing it from expanding. Therefore, the force that is required for the gas to expand must be equal to the total pressure pushing down it and has nothing to do with its internal pressure.

Consider this example. I want to push a box across my room which is covered in carpet. To move the box, obviously I need to apply a force to it. The force that I need to apply to must be equal or greater than the resisting force which is the friction between the box and carpet. This force that is required has nothing to do with the speed of the box.

So, as you can see, we have derived the equation for work done by a gas. The main thing that you need to recognise is that the internal pressure is irrelevant when considering the force required for the gas to expand. All you need to consider is the force that is preventing it from expanding which is the external pressure.

The confusion originates from not writing the enthalpy equation correctly because simply writing H=E+PV does not tell us what is happening where. So clarity is given by writing

dH=(dE)sys + (PdV)atm and since the work is done exterior to the system then we can rewrite it as dH=(dE)sys-(PdV)sys But the above can be confusing. Imagine we are heating water bring it to a boil, and dQ is the energy in (due to heating. Now we would write

The above equation is really latent heat of vaporization with the systems energy change being it changes in the bonding energy i.e. (dE)sys = (dU)sys

Now I argue (this is published in peer review [1,2,3] but remains controversial) that the work done onto the surrounding atmosphere: (W)atm = (PdV)atm is lost work because it is irreversible i.e. in order for the atmosphere to work on a system, then the atmosphere must be at a higher pressure than the system. This is controversial because it can become a challenge to the second law, namely lost work into the atmosphere means that the second law is no longer necessary to explain why we cannot have perpetual motion, or why energy is lost by expanding systems like a steam engine or why the Carnot cycle is ideal rather than realistic.

1
Why do we use external pressure to find force exerted by gas on a piston in a closed vessel during its expansion?

2
Thermodynamics, pressure volume work
0
Work in free expansion
2
Thermodynamics : Work Done by a Gas
1
Work done under constant pressure
0
Work done by adiabatic expansion of gas
2
Work done in an isothermal irreversible process
1
Is there a widespread error/contradiction on whether to use internal or external pressure in computing work done by an expanding gas?