Do enolates get protonated at the carbon or oxygen atom?

An enolate has two resonance structures. When it gets protonated, where is the $\ce{H+}$ more likely to go? On the oxygen to produce an enol, which tautomerizes to the keto, or on directly onto the carbon (no enol intermediate). I know that both lead to the same product, but when drawing the mechanism this would be good to know.

Like all ions in solution, the enolate does not exist on its own in free form. It will be solvated with maximum efficiency. Depending on the solvent itself, the counter ion might be further or closer away, but charge balance needs to be maintained in the bigger picture.

Contrary to popular belief, the enolate ion is nothing that truly exists in non-gaseous phase. Therefore the question what gets protonated first turns into the question: Does the oxgen or the carbon have the stronger interaction with the solvent? This is quite hard to judge and very dependent on the whole system. there is certainly no general rule for it and as previously stated by bon, it does not really matter, because keto-enol tautomerism is fast and the ratio is entirely determined by the relative stabilities to the involved species.

There is another issue when talking about protonation. The proton itself is not free, either. In an aqueous solution the smallest model would be the hydronium ion. But this is far from being complete either. A whole branch of computational and theoretical chemists work on describing water clusters with models. It is extensive. One of the reasons for it being hard to comprehend is the high flexibility and mobility of protons even when bound to other species. The high conductivity of an acidic or basic solution is mainly governed by the Grotthuss mechanism. This kind of mechanism can in first approximation also be applied to keto-enol tautomerism.

But before we dig deeper into any mechanism, I would like to look at the properties bon outlined for the enolate. The following results were obtained at the DF-BP86/def2-SVP level of theory for the deprotonated butan-2-one resonance hybrid.
Let's look at the obvious first: resonance. With the help of the natural bond orbital theory (NBO) I performed the analysis. The first and most obvious thing is that it finds a so called hyper-bond between the oxygen and the two carbons with an occupancy of 3.95 electrons. As we will see in the refined analysis, this is in favour of the carbon-carbon bond (59.5/40.5 considering only these three atoms).
A more refined analysis, I chose a cut-off of 5%, include secondary resonance structures, seven in total, gives us the following weights for the major contributors:

From these structures we can support the highlighted arguments in the statement by bon:

Attack on an enolate by an electrophile (in this case just a proton) is governed by the balance between electrostatic interactions, which are strongest at the oxygen atom due to its greater negative charge, and orbital interactions, which tend to be stronger at the carbon atom because the HOMO of the enolate has a greatest contribution at this atom [carbon].

The predominant contributor is is the enolate, hence in the overall description also its negative charge should be predominant. The π-system is certainly part of the HOMO in any case. Since it is mainly localised over the carbons, the highest contribution should be there.

We can further support that by looking at the natural charges of this model. More prominent is it looking at the charges obtained in terms of the quantum theory of atoms (QTAIM) in parenthesis. 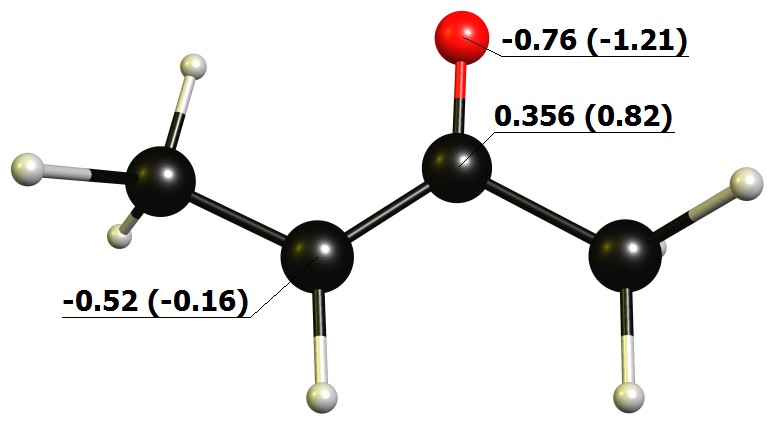 All these calculations are only evaluations of the ion in the gas phase, so they can serve as an example to understand the true nature a bit more. It is in no way intended to be complete, it shall only provide a more concise educated guess of the general nature.

Now that we have a lot of information on the enolate itself, it's time to look towards a mechanism of a solvent-mediated keto-enol tautomerism. I have chosen the most simplest model possible, with one water (hydronium) explicitly included. The result is a six-membered cyclic transition state, where a proton is transferred from the oxygen of the enol to the oxygen of water, and one proton is transferred from water to the carbon of the double bond.
In theory there might well be many more water molecules involved. In principle any protic solvent is capable of doing this. The principle reaction path is the same for a base mediated mechanism, for example with ammonia.

If you look closely enough, I have borrowed heavily from the Grotthuss mechanism. A somewhat simultaneous transfer of protons. It needs to be acknowledged, that this is only an approximation of a stationary system. The animation only shows the transitional vibration mode (imaginary mode). It is not the calculated structural change or reaction path.
Unfortunately the calculations even on this low level of theory take quite some time. Currently I have no barrier height to report as an estimate, how fast this reaction would be approximately. I'll update this as soon as I can.

There is of course the possibility of a non-mediated transition state. This one, however, proceeds through a four-membered cyclic transition state. This one is highly strained, if you like the concept of ring strain, and seems unlikely compared to the above in any other medium than the gas phase.
If you are repulsed by the concept of ring strain, then you might want to look at it from a different angle. The deformation energy is high, since the carbon-carbon-oxygen is forced into a near 90° angle, hence increasing the p-content of the bonding orbitals. Higher p-orbital content means higher energy of the molecule. Therefore the activation energy will also be higher.

For a deeper insight into this, I recommend “Ab Initio Molecular Dynamics Study of the Keto–Enol Tautomerism of Acetone in Solution” (Clotilde S. Cucinotta, Alice Ruini, Alessandra Catellani, András Stirling, Chem. Phys. Chem. 2006, 7 (6), 1229-1234), which is available at researchgate.net.

Attack on an enolate by an electrophile (in this case just a proton) is governed by the balance between electrostatic interactions, which are strongest at the oxygen atom due to its greater negative charge, and orbital interactions, which tend to be stronger at the carbon atom because the HOMO of the enolate has a greatest contribution at this atom.

Since a hydrogen ion has a high charge density, I would expect the reaction to be governed primarily by electrostatic interactions and so the protonation will preferentially take place at the oxygen. However, keto-enol tautomerisation is fast, and the product is the same with either mechanism so it really makes no difference.

I don't think that question is very meaningful since resonance structures do not actually exist and both lead to the same product. As the enolate with the carbon-carbon double bond is more stable, it is probably the most accurate representation of the resonance hybrid so I personally always protonate enolates at oxygen when drawing mechanisms.

Tautomerisation requires a proton transfer! Therefore (in basic solution) it proceeds as follows (sorry the double arrows are meant to represent equilibrium not resonance): $$\ce{Ketone + Base- <=> Enolate + BaseH <=> Enol + Base-}$$

The Enolate is the intermediate in the tautomerisation equilibrium.

I assume you're getting the enolate from some other reaction / reagents in a synthetic pathway to the ketone?

As for which the Enolate is most likely to become, that will depend on the thermodynamics and kinetics of the two equilibria.

For example, if the solution contains 90% ketone and 10% enol, then it would be 9 times more likely for the molecule to "end up" as the ketone form.

But protonation/deprotonation at carbon is much slower than at oxygen, so you might expect most molecules to interconvert between enolate and enol several times before settling on the ketone form.

The bottom line is, all three species are in a pretty rapid equilibrium, so it doesn't matter.

If you're drawing the mechanism I would show $\ce{enolate -> ketone}$. I would ignore the enol form completely, unless you want to make some kind of point, in which case I would show it in equilibrium with the enolate, in a branch on the main mechanism pathway.

12
Stability of 4-pyridone vs 4-pyridinol
22
Is carbonyl-enol tautomerization only intermolecular or can it be intramolecular?
5
Is there a way to force C-protonation of an enolate?

4
Hydrolysis of cyclic acetal
22
Is carbonyl-enol tautomerization only intermolecular or can it be intramolecular?
0
Which base accepts the proton abstracted from water in propyne hydration?
4
Resonance of carbonyl