How to find the number of stereoisomers of a tetra-substituted allenes, exhibiting both axial and central chirality?

I need a reliable method for determining the number of diastereomers and enantiomeric pairs of the following series of compounds bearing in mind that the substituent groups A are chiral on their own (exhibiting central chirality).

There are two planes of interest bisecting the allene sistem, the one constains the left A groups, the other is orthogonal to it. If two A groups are to be reflected through one plane (so it becomes a symmetry plane) their configuration must be different. That is all regarding the central chirality, but I don't know how to include axial chirality in this description (so I don't count one stereoisomer twice).

I think that these are the four diastereomers. Instead of A, I wrote the configuration of A (R/S). Now, as R and S are connected with a mirror plane, diastereomers 2 and 4 shouldn't exhibit axial chirality, as R and S can be regarded as same substituents on one side of the allene system (because of the mirror plane). That's why the third diastereomer exhibits axial chirality (P/M). I am not sure whether my reasoning is correct. The rest beats me. The answer should be 4 diastereomers and 3 enantiomeric pairs (last page), but how?

Axial and planar are just adjectives we can use to describe what type of chirality a molecule possesses. Usually, just saying the molecule is chiral is good enough. Being planar or axially chiral does not create any new enantiomers or diastereomers compared to if we just said the molecule is chiral.

Let's analyze your problem using standard methods - no special techniques just because the molecule happens to be axially chiral. 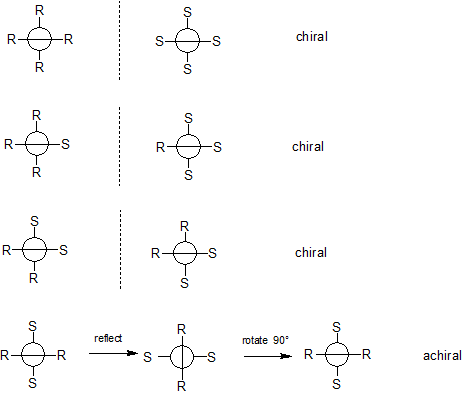 In the top diastereomer, all 4 chiral substituents are the same; the molecule has a non-superimposable mirror image (enantiomer). Therefore this diastereomer is chiral.

In the second diastereomer, 3 chiral substituents are the same, one is different; again, the molecule has a non-superimposable mirror image (enantiomer). This diastereomer is also chiral.

In the third diastereomer, two chiral substituents with different chirality are attached to the same carbon; again, the molecule has a non-superimposable mirror image (enantiomer). This diastereomer is also chiral.

In the fourth diastereomer, two chiral substituents with the same chirality are attached to the same carbon. This diastereomer belongs to the interesting point group $\ce{S_4}$. I say interesting because this point group does not contain a $\ce{\sigma}$ plane, but is still nondissymmetric (achiral). Look at my Newman projection for this diastereomer and picture it lying behind the plane of the screen. Reflect it in the plane of the screen and then rotate it 90° (n=4, 360/4 = 90°) and you have recreated the original molecule. This molecule is achiral (all molecules belong to point group $\mathrm{S}_n$ [n is an even integer] are achiral).

So what do we wind up with? 4 diastereomers, 3 of which are chiral (enantiomeric pairs) and one is achiral.

5
How to determine the number of stereoisomers of a di-substituted allene, exhibiting both axial and central chirality?
3
What symmetry elements mustn't a molecule possess to be considered achiral?

11
Effect of periodic acid on cyclohexane derivatives
1
Stereogenic C and enantiomers
5
How to calculate the number of geometrical isomers in allenes?
5
How to determine the number of stereoisomers of a di-substituted allene, exhibiting both axial and central chirality?
7
M/P nomenclature for axial-chirality
2
Alkene Electrophilic Addition Reaction Stereoselectivity When Two New Asymmetric Centers Form
7
How to find the plane of symmetry in biphenyls and substituted cyclohexanes?
9
Why are carbons of Inositol chiral centers?
7
Does 1,4-dimethylcyclohexane have a chiral center?