The rate of a reaction between A + B was followed spectroscopically at three different wavelengths, and the percent absorption at each wavelength was plotted as a function of time. Which of the following mechanisms is consistent with the spectral data? 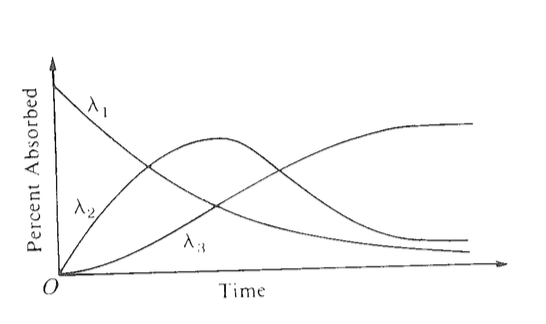 The correct answer is (b), which I can believe, but not sure why.

So, it can't be (a), because in $\lambda_2$, the curve went up then down, indicating the presence of an intermediate. However, I'm not sure why this can't be (d) or (c) as well. As long as F, G, and H are active at $\lambda_2$, then wouldn't all of the reactions show a similar curve?

kinetics stoichiometry spectrophotometry
Share
Improve this question
edited May 26 '17 at 22:16

Let's see. You are right in that it can't be (a). Now consider (c): A and B are consumed, while F and G accumulate. Where is that intermediate that goes up, then down?

As for (d), I believe there is no way we can tell that from (b) based on the picture alone, without looking at the numbers. See, suppose $\lambda_1$ actually measures B, and A is in huge excess; what would be the qualitative difference between the two? I can't see any.

Not the answer you're looking for? Browse other questions tagged kinetics stoichiometry spectrophotometry or ask your own question.

5
Determining Rate Law and Reaction Mechanism from Method of Initial Rates
2
Error in calculation of rate of reaction through graphs
7
Home science optical absorption test for approximate caffeine quantity in coffee?
1
Analysis of methylphenidate (Ritalin) HCl extended release tablets
1
Determining the rate equation from a reaction where one reactant is in excess
1
Effective attenuation coefficient for polychromatic light
0
Determining the formula of zirconium oxide