Axial or planar chirality in spiro[3.3]hepta-1,5-diene

The two spirocyclic compounds drawn below are enantiomers. My question is, do they exhibit axial or planar chirality?

Axial or planar chirality in spiro[3.3]hepta-1,5-diene

There is no restricted rotation that brings about chirality in this molecule. Unlike trans-cyclooctene or a biphenyl, this molecule cannot be made to lie in a plane by torsional motion (at least not as long as we maintain the tetrahedral nature about the spiro carbon). Therefore, this molecule does not possess a chirality plane.

Rather, this molecule is analogous to the allenes. It does have a chirality axis passing through the $\ce{CH}$ group in each ring furthest from the spiro carbon along with the spiro carbon. The molecule can be said to possess axial chirality.

With regard to nomenclature of chiral spiro compounds, the current version of Nomenclature of Organic Chemistry – IUPAC Recommendations and Preferred Names 2013 (Blue Book) distinguishes three cases:

(Note that no stereodescriptor ‘E’ or ‘Z’ is needed to describe a double bond when the stereogenic unit is located in a ring having less than eight members.)

Now that I have had some experience on this site, I would like to get into the good graces of Glorfindel by expanding on how the assignments to (2R,4S,6R)-2,6-dichlorospiro[3.3]heptane presented by Loong are made. I will use the (2S,4R,6R)-enantiomer. The method requires the use of digraphs as shown in illustrations A and C below. To create digraph A, each bond to the spiro atom (C4) is “cut” and methylene carbon is terminated with a phantom group (red dot, fake C4). What is left is a carbon atom with two pairs of identical groups of the type C(a,a’,b,b’) where a>a’>b>b’. The chirality of all “four” chlorine-bearing carbon atoms (C2 and C6 ) are assigned temporary descriptors (R0>S0) where Cl>CH2-C4>CH2-phantom>H. The R0 groups are assigned the top priorities with the proviso that the first and third priority groups are derived from the same ring. Accordingly, the CIP method assigns the spiro carbon as having the R-configuration. 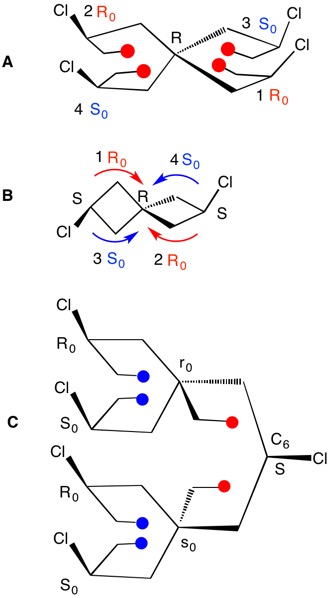 Another approach is represented in illustration B that doesn’t require dissection of the rings. The methylene groups attached to both chlorine-bearing carbon are assigned temporary descriptors knowing that chlorine is the top priority and hydrogen the lowest. Both digraphs A and B give the same R-configuration for the spiro carbon independent of which ring is assigned the first and third priorities.

The assignments to C2 and C6 utilizes digraph C. To determine the configuration of C6, one dissects C2 and C4. The temporary configurations at C2 are assigned as seen in digraph A. Assignment at C4 has the priorities C6-chain>R0>S0>phantom. The chirality at C6 follows the priorities Cl>R0>S0>H leading to an S-configuration at C6. Owing to symmetry, the same analysis applies to C2.

7
How to find the plane of symmetry in biphenyls and substituted cyclohexanes?
7
Chirality of spirocyclic compound