Why is there a sudden drop in the concentration of ammonia in this graph? 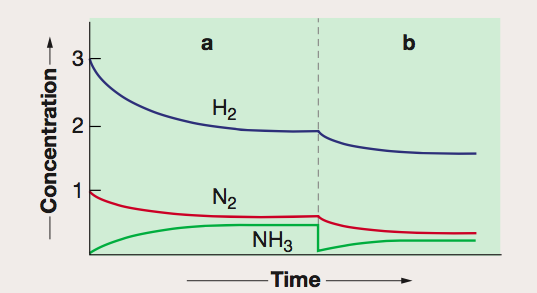 So initially they are mixed with the mole ratio of $\ce{H2}$ and $\ce{N2}$ being 3:1 respectively. It seems as the reaction proceeds, both these quantities decrease and the quantity of ammonia increases until a point at which $\ce{NH3}$ stagnates. What happens at this point?

In the graph the following reaction will occur: $$\ce{N2 +3H2 <=> 2NH3}$$ This reaction is an equilibrium reaction and you can see that there is exponential decay for the reactants while the product is formed. After a while the concentrations do not change any more, so the system is in equilibrium. This is at the end of the time span "a".

7
Chemical Equilibrium - Why do changes in pressure cause a shift in the ratio of products and reactants?
2
The effect of concentration on the rate of a homogenous reaction
4
Why does multipying a scalar in both sides of a balanced chemical equation, change related quantities?
3
Why is the boiling point of water and ammonia so different?
2
Is the application of Le Chatelier's principle wrong in this case?
0
Why is the melting point of hydrogen fluoride lower than that of ammonia?
1
What would be the concentration of products in this calcium producing system?
7
Why is concentration used as a proxy for activity instead of mole fraction?
1
How come we can't use the equivalence point equation of NV=NV in this problem?