How do Electrons Cross Nodes in Orbitals?

I was wondering in orbitals that have nodes such as the p orbital, how does the electron move from one lobe to the other? I know that people say it is because of the wave/particle nature of electrons but they don't actually explain how they travel across the node without actually passing it.

From the comments, they state that electrons can be thought as standing waves. After looking at the internet I came across the following image which explained how electrons act as a standing wave: 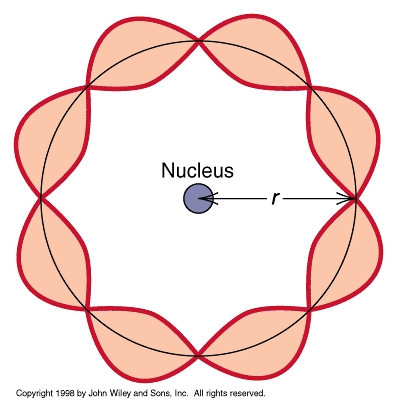 However this doesn't make sense to me. Don't electrons exist in orbitals not in orbits around the nucleus? If so, isn't this wrong? Also, since electrons move in orbitals, how can there be any end points as it can move anywhere and its movement isn't restricted to a close loop. Hence how can it act as a standing wave?

Electrons (indeed all matter and energy) behave both as wave and as particle, depending how the observation is made. The most obvious example is the single-electron interference pattern.

"In 1974 the Italian physicists Pier Giorgio Merli, Gian Franco Missiroli, and Giulio Pozzi repeated the [interference] experiment using single electrons, showing that each electron interferes with itself as predicted by quantum theory. In 2002, the single-electron version of the experiment was voted "the most beautiful experiment" by readers of Physics World." Wikipedia.

Electron properties are well described by treating them as particles or waves, and the de Broglie equation is useful because it relates wavelength and momentum which are wave and particle properties, respectively.

Remember that there are limits to any analogy!

Your diagram tries to show how a standing wave can be in an orbit by bending the 1D slinky toy analogy into a circle. This might be useful in understanding that only standing waves make orbits through a constructive interference analogy.

Electron as particle: If you want to look for the electron particle that has the energy of a standing wave then the probability curve of finding it in 1D is going to look like the slinky toy.

Electron orbitals: These are representations of the probability curve in a 3D for electrons in orbit.

1
Nodes of orientation of electron orbitals
1
Electrons in orbitals with nodes
5
How do electrons travel through nodes
5
Amine Inversion and Paramagnetism
1
Why there are nodes in orbital?
-2
Do electrons in an atom revolve around the the nucleus clockwise or counterclockwise?

30
How do orbitals coexist with a nucleus?
1
What is the reason why protons and electrons do not collide?
1
How does the Wave-Mechanical model reconcile with the particle definition of an electron?
6
Why do solutions of electron in a box (and in a ring) predict coefficients for LCAO (linear combination of atomic orbitals) in 1D systems?
0
How can an electron being a wave have such property as spin?