According to my books the bond order of $\ce{CO+}$ is $3.5$. But shouldn't it be $2.5$? On googling this, I found the following answer that is on Stack Exchange but its only talks about the bond length.

When we have a look at the MO diagram, a calculated version can be found here, we know that the HOMO, i.e. 3σ, is a bonding orbital, while the anti-bonding orbital is the 2σ. Upon ionisation, we would indeed remove one bonding electron and therefore the bond order has to decrease to 2.5 as you suggested.
However, it is not that easy. Strictly speaking the below MO scheme is, as well as MO theory itself, an approximation, and only one possible configuration. While we do not have to use resonance structures with MO theory, we have to consider other configurations (analogous to excited states). So naturally the bond order of CO is not strictly 3. And removing an electron does not mean we are removing it from only one orbital, rather than decreasing the electron density. Therefore we cannot accurately predict the bond order with these simple considerations.
Experimental observations and theoretical calculations suggest that the bond indeed becomes stronger when removing an electron. See the linked question and Philipp's answer within for more detail. (Don't look at the other answers, they are as wrong as they could be.)

In short: The bond order of $\ce{CO}$ is not exactly 3 and removing an electron will not increase the bond order to 3.5. In both cases, the observed bond order is probably closer to 2.5, while experiments suggest that the bond is stronger in $\ce{CO+}$. 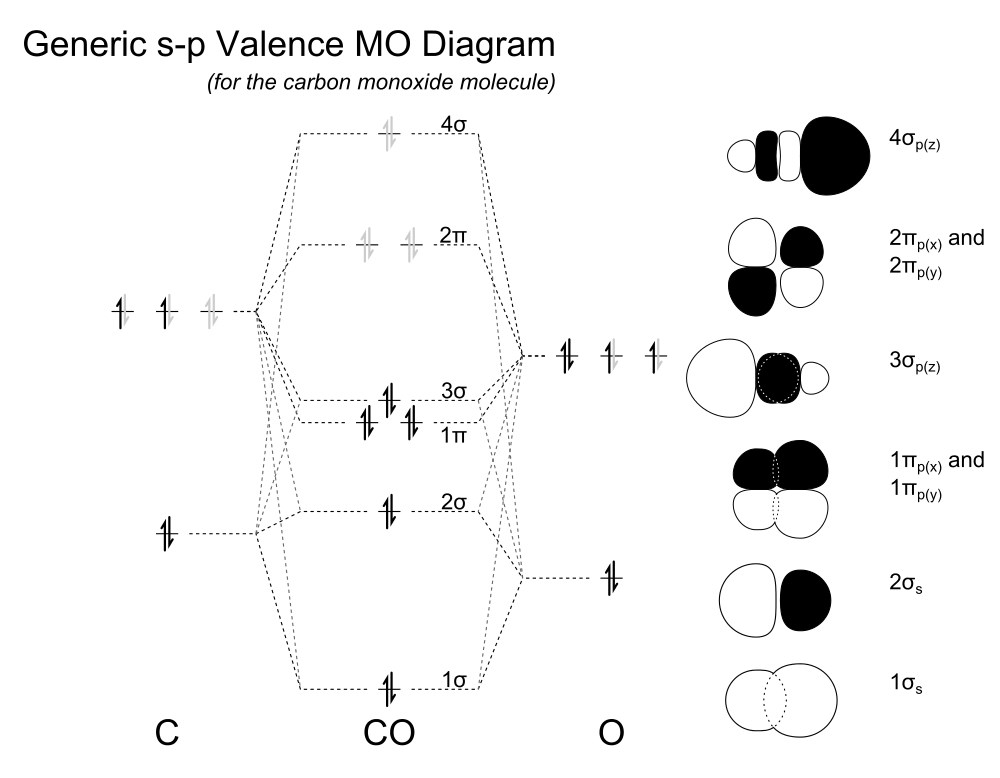 This is a very good explaination I found here: http://www.answers.com/Q/What_is_the_bond_order_of_CO_plus

CO is not a homo-nuclear atom like C2, N2 or even O3, O3 (both these categories are different: with and without 2s-2p mixing). So there is a large discrepancy in the atomic energy levels of 2s, 2p e- of C and O.As a result, 2p(pi)x, 2p(pi)y and 2p(sigma)z have lower energy than 2s(sigma)*. So the e- lost is from 2s(sigma)*2 and not 2p(sigma)z. And hence the bond order increases from 3 to 3.5 and not decreases to 2.5 . (The typical school textbook formula doesn't work for species like CO,CO+ and even NO,NO+ in many situations)

Due to small size and positive charge CO structure faces 2s antibonding repulsion and when electron is ejected out it is removed from 2s antibonding so bond order become 3.5

Not the answer you're looking for? Browse other questions tagged bond molecular-orbital-theory theoretical-chemistry or ask your own question.

33
Why is the bond length of CO+ less than that of CO?
39
How can the dipole moment of carbon monoxide be rationalised by molecular orbital theory?
6
Nature of a1g Molecular Orbital Interactions in Ferrocene

33
Why is the bond length of CO+ less than that of CO?
3
How to rationalise the increasing bond length order in the carbonate ion, carbon monoxide, and carbon dioxide?
3
Which has the greater N–O bond length, NO₂⁻ or NO₃⁻?
2
Which has greater N-O bond length: NO or NOCl?
5
C=O bond length comparison among cyclohex‐2‐en‐1‐one and cyclohex‐3‐en‐1‐one
3
Why do PBr3 and PCl3 have larger bond angles than PH3?