[...] the enolates of some metals [Sn(II), Zr, Ti] give syn aldols regardless of enolate geometry.

If they were to obey a simple Zimmerman–Traxler chair-like transition state model, as is applicable for Li or B enolates, then (Z)-enolates should give syn aldols and (E)-enolates anti aldols. How does the mechanism or stereochemical model differ for these enolates?

For most aldol reactions, the relative 1,2-diastereoselectivity is a consequence of the enolate geometry.*

Both tin and titanium enolates are easily formed, and have been shown to exist predominantly in the (Z) configuration.

When reacting a cyclic (Zimmerman Traxler) TS, its commonly observed that (Z) enolates afford 1,2-syn aldol adducts, due to the orientation of the enolate (the (Z) enolate always has an axial R-group).

The following examples are instructive. In both cases (tin or titanium), we first form a (Z) enolate using the conditions shown. When the aldehyde (R-CHO) is introduced, chelation using the metal organises the Zimmerman Traxler TS. The lowest energy TS possible is the one in which the aldehyde is arranged with its bulky R group equatorial, however the enolate cannot put the methyl group (in this case) equatorial, as the enolate geometry enforces its axial positioning. Following both transition states through, we get the 1,2-syn aldol adduct in both cases.#

The description given in Carey is fundamentally incorrect for the reactions shown (even if it does predict the correct product). Looking at the references he gives, they're all fairly old, before more recent experimental and computation studies have validated the cyclic TS model for these kinds of metal enolates.

*: Mukaiyama aldol reactions do not conform to this, since they occur via a fundamentally different transition state (an open TS) to the Zimmerman Traxler model commonly found for other aldol reactions.

In Carey, Sundberg Advanced Organic Chemistry it is stated:

This preference arises from avoidance of gauche interaction of the aldehyde group and the enolate beta-substituent. The syn stereoselectivity indicates that reaction occurs through an open TS.

The relevant conformations adopted by the two molecules in respect to each other, just before the reaction takes place are attached. The lower one, which leads to the anti aldol, has the energy increasing gauche interaction (the R groups may differ): 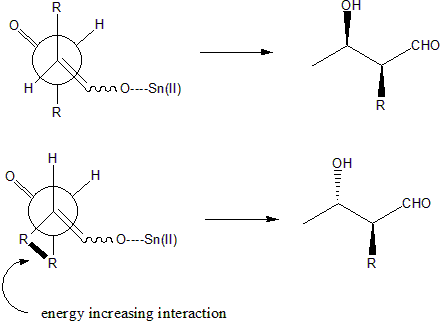 Therefore is doesn't matter whether the enolate configuration is Z or E, the syn aldol will be obtained stereoselectively.

Not the answer you're looking for? Browse other questions tagged organic-chemistry aldol-reaction stereoselectivity or ask your own question.

31
Why does the unstabilised Wittig reaction selectively form cis alkenes?
2
Alkali metal enolates
17
Why does acetate aldol with Evans auxiliary give almost no diasteroselectivity?
7
Why does the chlorination of indene occur with syn selectivity in heptane?
12
Models for diastereoselectivity in nitronate additions
6
Chelation-controlled aldol: why is the α substituent pseudo-axial?
1
Is one syn aldol product preferentially formed over the other?
4
Does syn-dihydroxylation form racemic mixture?