How can 32 g of Gatorade powder contain 33 g of carbohydrates?

A screenshot of the nutrition facts of a can of Gatorade powder was posted on my Facebook feed: 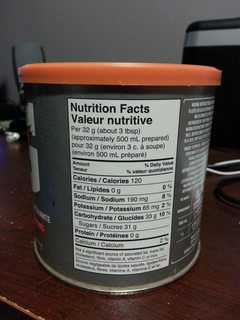 The label reads "Per 32 g (about 3 tbsp)", but if you read through the ingredients, the amount of carbohydrates listed exceed that of the serving size (33 g).

My question is, how can this possibly be? Is there a chemical process as some people have suggested that is changing the 32 g of powder into 33 g of carbs once water is added?

Re-asking it here for a chemistry perspective as some users have suggested on skeptics.SE.

Is there a chemical process as some people have suggested that is changing the 32g of powder into 33g of carbs once water is added?

No. Even if there was, it's not relevant in this case: the numbers on the label are an assay of the pure contents of the product before it's mixed with anything, or prepared or altered in any way. Nutrition labels refer to the product as-is.

In the United States, the Food and Drug Administration is in charge of labeling the quantities you're interested in. The relevant document is the Food Labeling Guide, one of many documents which are linked from a more comprehensive list called Labeling and Nutrition Guidance Documents and Regulatory Information. As per the comments (below), I'm noting that it appears as if the product pictured in your post is from the Canadian market and thus subject to nutritional labeling dictated by agencies in Canada. That said, the methodologies used by both the US and Canada are similar.

There are at least 2 regulations detailed in the labeling guidelines that we need to examine here to explain what's going on:

(1) The numbers reported on the container have simply been rounded up or down as per the Food and Drug Administration's Appendix H in the Food Labeling Guide. For instance, they show that for Total carbohydrate and Sugars, anything less than 0.5 g is expressed as 0 g, and quantities greater than or equal to 1 g are to be expressed in the nearest 1-gram increment. This is why of the 33 g of total carbohydrate, only 31 g appears to be accounted for as sugars;

(2) Total carbohydrate is calculated in a way that propagates rounding errors introduced as detailed in (1):

Total carbohydrate is calculated by subtracting the weight of crude protein, total fat, moisture, and ash from the total weight of the sample of food.

In summary: The numbers don't add up because quantifying the components of a food to conform to the rules and regulations for reporting them on a Nutrition Facts label allows for the accumulation of rounding and measurement error.