Why does hydrogen fluoride have a boiling point so much lower than that of water?

I think there are a variety of qualitative ways of looking at this:

Experimental results are the gold standard, of course, as opposed to qualitative reasoning, and qualitative reasoning here can also lead us in the opposite direction; one might argue that by having three lone pairs, F has a lot on its plate, so to speak; it might be able to stabilize one lone pair of electrons very well but three lone pairs is a bigger ordeal, and perhaps big enough that the hydrogen bonds among $\ce{HF}$ molecules are stronger than those among water molecules. Again, this is all qualitative, but this is the sort of reasoning introductory chemistry teachers desire.

Other issues must be explored as well, such as the number of viable hydrogen bonds and the electron-donating/releasing tendencies of the involved elements.

After scouring the web some common "explanations" that would not explain why water has a higher boiling point than $\ce{HF}$ would be:

The answer lies in hydrogen bonding.

Another factor is water disassociates (i.e. liquid water is partially made up of $\ce{H3O+}$ (three hydrogen and an oxygen, which is positively charged) and some $\ce{OH-}$ (one hydrogen and one oxygen, negatively charged). This increases inter-molecule interaction, making the boiling point higher.

I think we may have been focusing too much on $\ce{HF}$ and $\ce{H2O}$. If we look at the bigger picture of the boiling points of the hydrides of the elements of their respective groups, we can see that group 17 hydrides really have lower boiling points than that of group 16 hydrides. I still don't know why is the trend this way within each period, but the figure definitely tells us that:

So I think now the main question is: why do hydrogen chalcogenides have higher BPs than hydrogen halides (and is actually the group of halides that have the highest BPs in each period)? 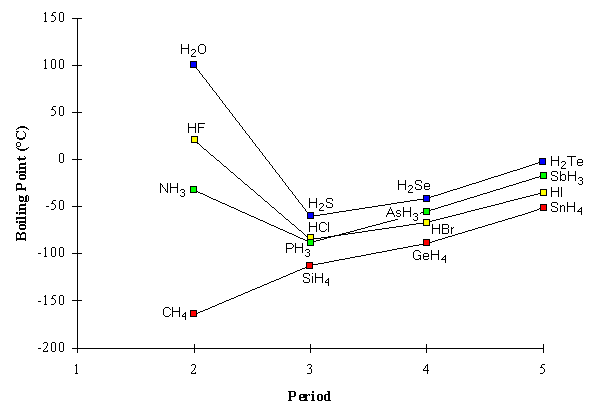 7
What is a hydrogen bond acceptor and donor?
2
How to compare the boiling point of water, ammonia and hydrogen fluoride?