In which of the reactions below is the first compound in the equation NOT oxidized? 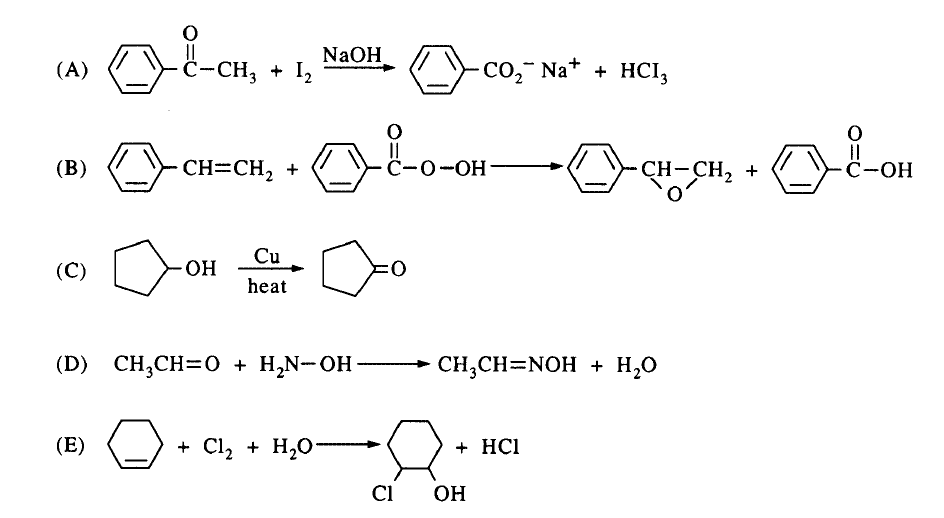 The correct choice is (D), which can be seen through process of elimination, but I was wondering how to do this through the carbon oxidation number?

Or is the correct way to think about this problem that: (D) didn't gain any oxygen atoms, therefore, wasn't oxidized and leave it at that?

There are several ways to determine oxidation number/state. The most useful method for organic (covalent) compounds uses the following three rules, and works for most elements engaged in covalent bonding (just replace carbon with some other element):

This approach is equivalent to assigning all of the electrons in a covalent bond to the more electronegative atom for purposes of determining oxidation number. This page on Master Organic Chemistry has a number of examples.

Here's an example from the Wikipedia article on the matter, using acetic acid:

Or is the correct way to think about this problem that: (D) didn't gain any oxygen atoms, therefore, wasn't oxidized and leave it at that?

This is the simplest way of thinking of the problem.

Many introductory organic chemistry texts define oxidation as carbon forming additional bonds to oxygen, and reduction as carbon forming additional bonds to hydrogen. So if we have a reaction converting ethanol into acetaldehyde, this would be an oxidation; the carbon previously connected to the $\ce{-OH}$ group is now connected to oxygen with two bonds instead of one.

Not the answer you're looking for? Browse other questions tagged organic-chemistry oxidation-state or ask your own question.

4
How do I determine the average carbon oxidation numbers in ethanol and ethanal?
1
Oxidation state of sulfur in H2S2O5

1
Potassium permanganate oxidation of sugars
7
Decarboxylation / Elimination type reaction
24
Is it possible for one specific atom in a molecule to have a non-integer oxidation state?
0
Oxidation State of Amino Group
7
Oxidation of an aldehyde - how is this a loss of electrons?
7
Reference for electronegativities of different metal oxidation states
3
Oxidation of fructose with conc. HNO3