Another important concept is the Heisenberg Uncertainty Principle which is the following formula: $$\Delta x \Delta p \geq \hbar$$ This means that the uncertainty of an object's position multiplied by the uncertainity in an object's momentum at best can only be equal to the constant value: $\hbar$ which equals $1.054*10^{-31}$ This equation can be applied to electrons. Hence, the important thing that this equation tells us about electrons in an atom is that rather electrons moving in a predictable circular orbit, they actually travel in any path that they want and we actually can't precisely determine position of the electron in an atom. Hence the quantum mechanical model of the atom actually consists of orbitals, rather than orbits.

Orbitals is the area which an electron is in 90% of the time. There are 4 main type of oribitals, s, p, d and f shown below. 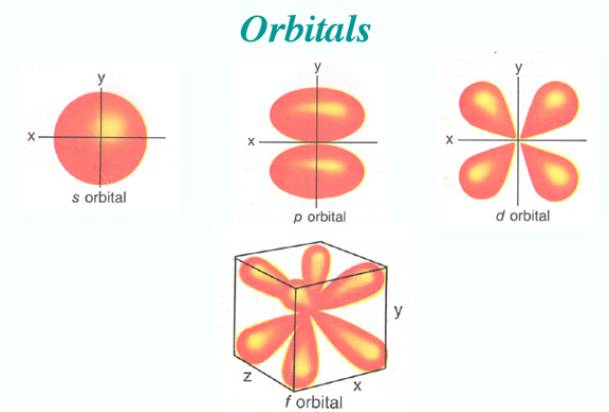 So, finding the velocity of an electron is little more complicated than using simple classical mechanic equations. However its velocity can be determined in simplified conditions using quantum mechanics.

Not the answer you're looking for? Browse other questions tagged physical-chemistry energy electrons or ask your own question.

14
How fast do electrons move around the nucleus?

5
Kinetic energy of electrons emitted in Photoelectron Spectroscopy
0
What is the wavelength of an electron?
2
Do really the electrons could only orbit in specific orbits with a fixed radius?
6
Why is there an orbital angular momentum if the electron isn't properly revolving around the nucleus?
0
Ratio of total energy to kinetic energy in hydrogen atom when the reference is changed