Regarding the mechanism for biological activity of tyramine, amphetamine and ephedrine

Graham Patrick explains the mechanism for the activity of tyramine, amphetamine and ephedrine in his book Introduction to Medicinal Chemistry as follows:

I have two question concerning this explanation:

Question: When these foreign amines have been taken up into the vesicles how do they proceed?...Do they re-enter the synaptic cleft by exocytosis...How are they eventually cleared from the synaptic area?

Here is the mode of action of these agents (indirectly acting sympathomimetics): 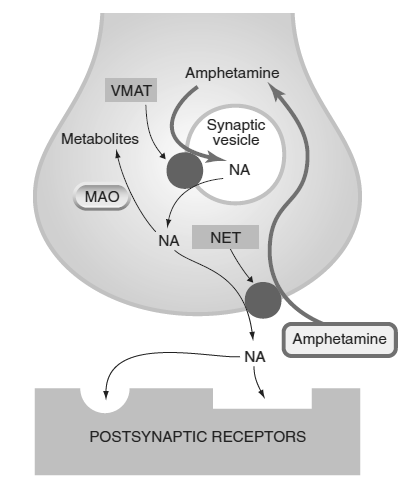 The most important drugs in the indirectly acting sympathomimetic amine category are tyramine, amphetamine and ephedrine, which are structurally related to noradrenaline. Amphetamine enters the nerve terminal via the noradrenaline transporter (NET) and enters synaptic vesicles via the vesicular monoamine transporter (VMAT), in exchange for noradrenaline (NA), which accumulates in the cytosol.

Some of the NA is degraded by monoamine oxidase (MAO) within the nerve terminal and some escapes, in exchange for amphetamine via the noradrenaline transporter, to act on postsynaptic receptors. Amphetamine also reduces NA reuptake via the transporter, so enhancing the action of the released NA.

These agents are cleared by metabolism via oxidative deamination with monoamine oxidase(MAO) enzyme, however are poor substrates for MAO and, thus, show a prolonged duration of action.

Amphetamine is an example of a drug metabolized through oxidative deamination:

Question: Why do the noradrenaline re-uptake proteins transport noradrenaline out of the axonal terminal under the influence of these foreign amines?

I am not really sure about the “why” part but instead the “how” part AFAICT, this is more of a displacement mechanism:

These drugs, do block reuptake 1(NET) releasing stored transmitter from noradrenergic nerve endings and they displace vesicular norepinephrine into the cytoplasm. The norepinephrine is then transported out of the nerve terminal by the reverse action of reuptake 1 and activates adrenoceptors. So essentially the drugs increase the availability of noradrenaline to stimulate adrenergic receptors by:

i. releasing or displacing NE (noradrenaline) from sympathetic nerve endings,

ii. blocking the transport of NE into sympathetic neurons or

Not the answer you're looking for? Browse other questions tagged biochemistry amines drugs medicinal-chemistry pharmacology or ask your own question.

4
What is the reaction mechanism for the hydrolysis of Amifostine?
16
What is the mechanism of action of anaesthetics?
3
How do the fields of medicinal chemistry, pharmaceutical chemistry, pharmacy, and pharmacology differ?
4
Mechanism for hydroxyethylation on nucleobases (e.g. Thymine)
0
Are ethyl iodophenylundecylate and Ethyl-10-(Iodophenylundecanoate) the same compound?
4
What is the mechanism for the reaction of acetyl chloride and aniline?
11
Could the difference between absorption time of Diclofenac Sodium and Diclofenac Potassium be related to the cation?
1
How does gefitinib affect the EGFR(ecptor) and why is there relapse
3
Biological activity of the isotopes of the same element