What's the reaction type of the Hydrogen shift?

Rearrangement of cycloheptatrienyl carbene yields heptafulvene via a hydrogen shift.

I see that the reaction is favorable because there is a conjugative effect with the $\pi$ system of the ring in the product.

Does this rearrangement happen by a radical transition state (TS) or is the mechanism more of a sigmatropic rearrangement?

What's the correct mechanism for this rearrangement?

organic-chemistry reaction-mechanism molecular-orbital-theory
Share
Improve this question
edited May 30 '21 at 5:32

This reaction can be viewed as a 1,2-sigmatropic hydrogen shift or as a 2+1 (if we are counting atoms, 2+0 if we are counting electrons) cycloaddition (adding the carbene's empty $\mathrm{p}$-orbital across the $\ce{C-H}$ bond - analogous to its addition to an olefinic pi bond to produce a cyclopropane). However the reaction is most commonly viewed as and referred to as an "insertion" reaction because the carbenic carbon is inserting itself in between the carbon and hydrogen atoms that comprised the $\ce{C-H}$ bond.

Here's what is known. 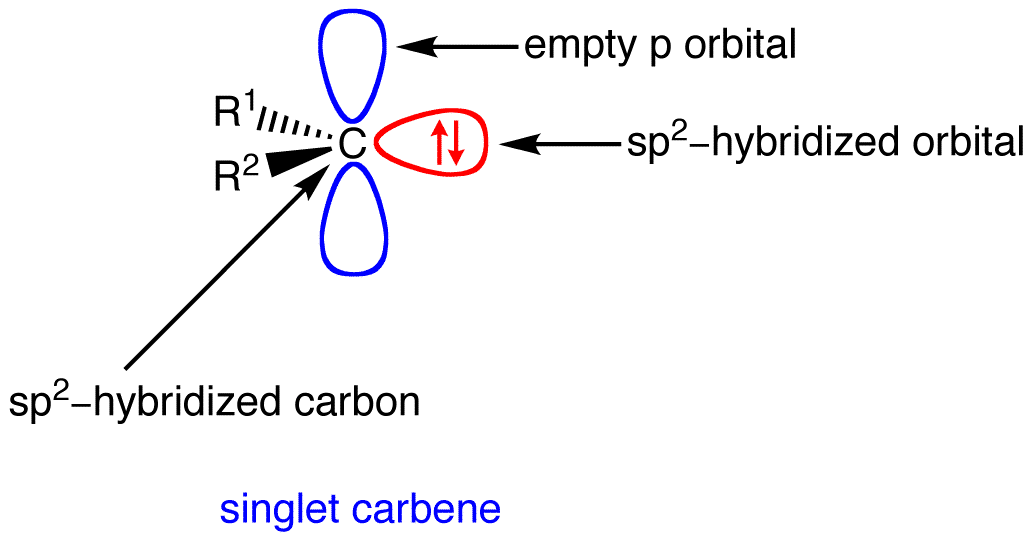 Further, insertion of singlet carbenes into stereogenic centers results in retention of stereochemistry at the chiral center. These facts suggest that both the cycloaddition and insertion reactions of simple singlet carbenes either proceed in a concerted fashion, or if any intermediate is formed it is extremely shorted-lived in order that stereochemical information be preserved. 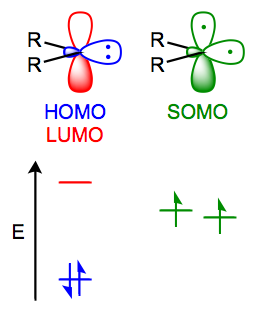 This controlling HOMO-LUMO interaction involving the empty carbenic $\mathrm{p}$-orbital in the rate determining step is consistent with the observed electrophilic nature of the carbene.

All of this information taken together suggests that interaction of the empty carbenic $\mathrm{p}$-orbital with the electrons in the $\ce{C-H}$ bond is the critical step. A geometry like that shown below is likely preferred. As the insertion proceeds, the trigonal carbenic carbon rotates. The rotation starts to bring the carbenic $\mathrm{sp^2}$ orbital into alignment with the p-orbitals in the 7-membered ring. Also during the rotation the $\mathrm{sp^2}$ orbital starts its rehybridization into a $\mathrm{p}$-orbital. When completed we have created the final product, heptafulvene. The reaction is likely concerted and certainly does not involve any long-lived intermediates. Note too that the heptafulvene is formed with increased electron density on the former carbenic carbon in accord with the dipolar nature (dipole moment ~$\pu{0.5 D}$ due to resonance stabilization) of the molecule.

11
Reaction between a carbene and n-pentane

32
Why does hyperconjugation help for ring cleavage?
17
Orbital correlation diagram for the cleavage of cyclopropylmethylene carbene
5
Explaining stereochemistry in a sigmatropic 1,3-alkyl migration
0
Is 1,3 alkyl shift allowed in Cyclobutyldicyclopropylmethyl Cation?
8
Mechanism of DPD (N,N-diethyl-p-phenylenediamine) reaction with free chlorine
9
Effect of substituents on arene oxide-phenol rearrangement
12
Mechanism for the addition of hydrogen iodide to 3,3‐dimethylbut‐1‐yne