Why does decreasing the distance between the electrodes in an electrolytic cell increase the rate of electroplating?

I did an experiment on the effect of the distance between the electrodes on the rate of electroplating in an electrolytic cell (copper electrodes with copper sulfate electrolyte).

As I expected, when the electrodes were closer, the current was greater and the rate of copper plating was also faster. But why does less distance increase the current? My initial thought was that less distance to travel=ions arriving at cathode quicker=greater current. That doesn't seem right though, because different ions are depositing and liberating electrons and hence not really flowing through (right?). I'm probably overthinking this, but any help is appreciated.

It's a bit of an oversimplification to explain this with a simple invocation of Ohm's law. The thing to remember about electrochemistry is that electron transfer only happens at every close distances to the surface (<10 nm) and it's the potential difference between the electrode and this tiny region at the surface that is important. You might be applying 10 V between the two electrodes, but if you have a lot of solution resistance between them, the voltage near the surface may only be 1 V as the other 9 V are dissipated as heat in the electrolyte. Thus, by moving the electrodes closer, the resistance goes down and the voltage the electrode "sees" is higher.

The trouble with this type of two-electrode cell is that many factors are being conflated. The current that is measured (the rate of electroplating) is dependant on what is happening at both electrodes as well as the resistance of the bulk solution. As the electrode voltage increases, the current usually increases too as increasing the voltage makes it easier for electrons to transfer between the electrode and the redox-active species in solution. Eventually, however, the rate will not be limited by electron transfer, but rather by how fast copper ions can move from the bulk of the solution to the active region near the electrode and a "limiting current" is reached. You can see this below as the voltage at an electrode is swept to higher values: 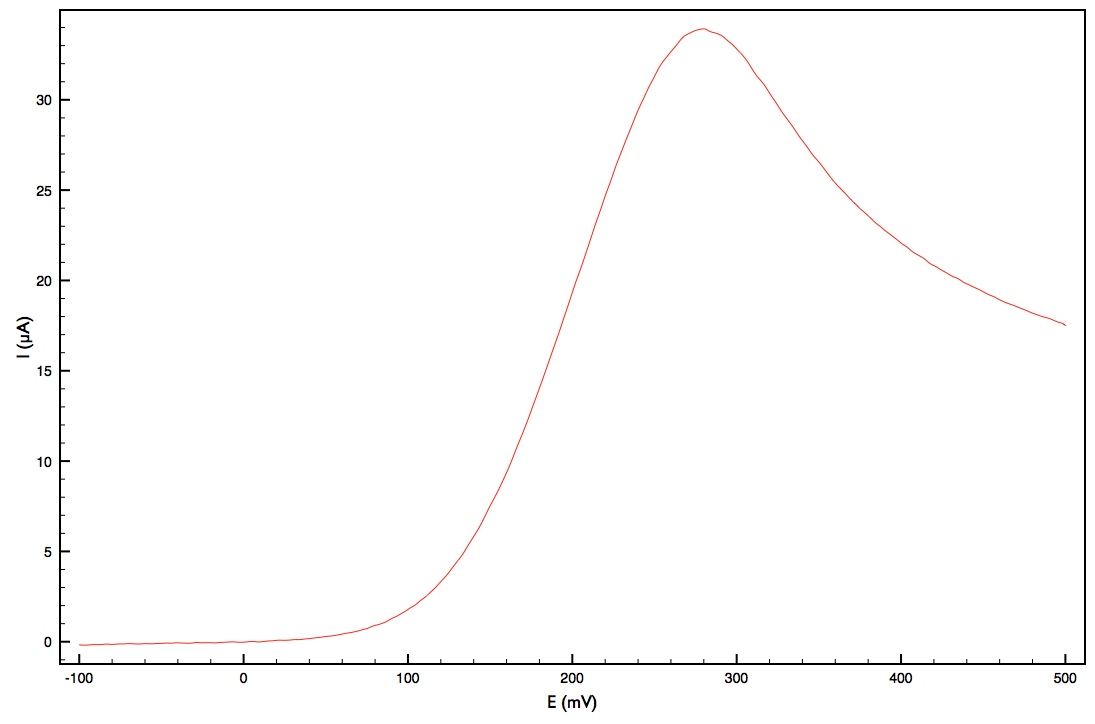 At low voltage, there isn't enough voltage for any electron transfer to occur, but as it increases along the x-axis, we see an increase in current until it reaches a peak and the current is limited by diffusion to the electrode. (the reason it goes down after this point rather than levelling out has to do with the time-scale of the experiment, but it's not important for this)

Because the system is so complicated, when we're interested in examining the reactions that are happening at just one electrode without worrying about the other electrode or the solution resistance, an alternate setup is used. If we use a feedback amplifier (known as a potentiostat) to control the voltage applied between the two active electrodes using a third (reference) electrode to measure the voltage close to the surface of the electrode of interest, we can decouple the effects of the solution resistance and other electrode.

My initial thought was that less distance to travel=ions arriving at cathode quicker=greater current. That doesn't seem right though, because different ions are depositing and liberating electrons and hence not really flowing through (right?).

You were actually onto something interesting here. You're right in that it takes a while for copper ions from one electrode to make their way to the other so most of the copper being deposited is coming from what was already in the solution (at least on relatively short time scales), but what would happen if we moved the electrodes very close to one another? Eventually we would reach a situation where copper could dissolve from one electrode and be almost immediately deposited on the other and we would not see the limiting current behaviour as above.

If the applied voltage is constant, lowering distance between electrodes leads to lowering the resistivity according to the:

As Michael D. M. Dryden pointed out, this answer is simplified and do not describe a lot of mechanisms that occur in a real deposition.

2
What prevents the anode from corroding in electrolytic organic reactions?
14
Does increasing concentration of copper sulfate decrease or increase its conductivity?
1
Electroplating a spoon (electrolytic cell) using a electrochemical voltaic cell
4
Why can higher voltages lead to less efficient electroplating?
1
How does increasing the Hydrogen Concentration of CuSO4 (electrolyte) affect electroplating of copper
0
Electrolysis of copper without any copper initially in solution
2
Electrolysis of copper sulphate using copper electrodes: Mass lost from anode is greater than mass deposited on cathode