What is the rationale of the IUPAC name for DDT?

The structure of DDT is 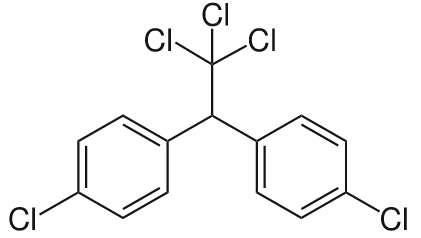 One of the benzene molecules should be the parent chain as it has a greater number of carbon atoms than the straight chain (which has just two carbon atoms). Taking benzene as the parent chain, I think that the name of the compound should be 1-Chloro-4-((1'-(4"-chlorophenyl))-2',2',2'-tricholoroethyl) benzene.

But the Wikipedia article states that the IUPAC name of the compound is 1,1,1-Trichloro-2,2-bis(4-chlorophenyl)ethane.

Why is the ethyl chain taken as the parent chain when it has lesser number of carbon atoms than the benzene ring?

According to the current version of Nomenclature of Organic Chemistry – IUPAC Recommendations and Preferred Names 2013 (Blue Book), a structure with two or more identical units that are linked by di- or polyvalent groups can be named in two ways:

The given structure of the DDT molecule fulfils these requirements; therefore, the preferred IUPAC name is generated by multiplicative nomenclature as follows.

The rule for identifying the parent chain isn't just "longest".

In fact, "longest" is the fallback for when no other means are appropriate. The most important decider is the number of suffix substituent groups, which in this case is (chloro-)phenyl.

It's not a benzene compound, because each benzene ring only has one (n-ethyl), whereas the ethane chain has two.

To understand why this should be so; let's consider the actual precedence list for naming the parent chain (from Wikipedia):

For DDT, we can use rule one: The ethane in the middle has two phenyls stuck to it, but each phenyl only has one ethyl; so the ethane wins.

For a simpler example of the same principle at work, consider 1,4-dioctylbenzene: A benzene ring with two octyl tails coming off of it. There are again two candidates for the parent chain, one making it a benzene, one making it an octane, 1-(4'-octylphenyl)-octane.

But because choosing the benzene gives a parent chain with two substituents, it becomes 1,4-dioctylbenzene.

There seems to be some confusion as to whether the rules presented above are the currently recommended ones. A careful reading of the 2013 Blue Book would be necessary to figure that out, and the text isn't online yet.

However: The priority rules above were the rules used to arrive at 1,1,1-trichloro-2,2-bis(4-chlorophenyl)etane.

6
Preferred IUPAC names for branched unsaturated hydrocarbons (polyenes)?
2
Omission of locants for functional groups in IUPAC names
5
How to select the parent chain in mechlorethamine?
8
IUPAC Naming of CH3C(p-ClC6H4)2CH(Br)CH3
4
Doubts on IUPAC name 1,1'-methylenebis(4-isocyanatobenzene)
4
What is the IUPAC name of the given compound?
5
IUPAC Nomenclature of a dioic acid