Orbital correlation diagram for the cleavage of cyclopropylmethylene carbene

In the last exam we were asked to rationalize the mechanism of the cyclopropylmethylene carbene cleavage into acetylene and ethylene.

In the lecture we discussed pericyclic reactions (cycloadditions, electrocyclic reactions, sigmatropic reactions, ene reactions). I don't think it's a con-/disrotatory ring opening, because in my view only a $\sigma$-plane is conserved over the entire reaction coordinate. What type of ring opening is this; is it a concerted or radical based C-C bond cleavage? Because there is highly probable an elongation of the bond length (as drawn in the stretched cyclopropane moiety), I don't assume it to be concerted but rather radical based.

I tried to classify the reaction in terms of symmetry along its entire reaction coordinate. Because from the task, a singlet carbene, I know it's a $sp^2$ hybrid, so I strongly assume the empty p-orbital to be in conjugation with the Walsh orbitals, more precisely with the Möbius type orbitals. 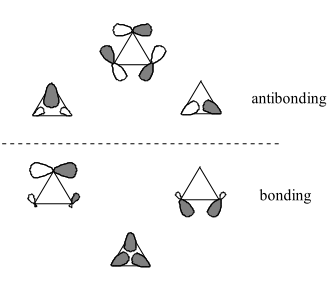 The problem is very similar to cyclopropylcarbinyl cation: 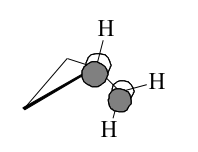 In the exam I was asked to draw the orbital correlation diagram. For me it looks like two radicals forms the double bond of ethylene and the "biradical" like centers recombines with the "biradicaloid" (in $sp^2$ orbital). I call a carbene a diradicaloid or biradicaloid because the two radical electrons share the same orbital.

To correlate reactants with products I need to combine orbitals with the same symmetry. We only draw the orbitals which are involved either in bond braking or in bond making. How should I account for the biradicaloid singlet $sp^2$ orbital in the orbital correlation diagram? (It is forming the triple bond of acetylene, so there must be a change of hybridization.) For me it looks like to have no symmetry (neither A' nor A'' because it lies in the mirror plane, because it is eclipsed with the $\alpha$-carbon-H.

If it's a radical mechanism I assume the Möbius orbital of A'' symmetry (depicted in green) to correlate with the $\pi^*$ of ethylene.

I assume, the cleavage happens preferently with light, because in this way I can put a photon from A'' (green) into the orbital of A'' symmetry on the reactant site and therefore lowering the activation energy for the reaction.

I assume the orbital correlation diagram to look something like this: 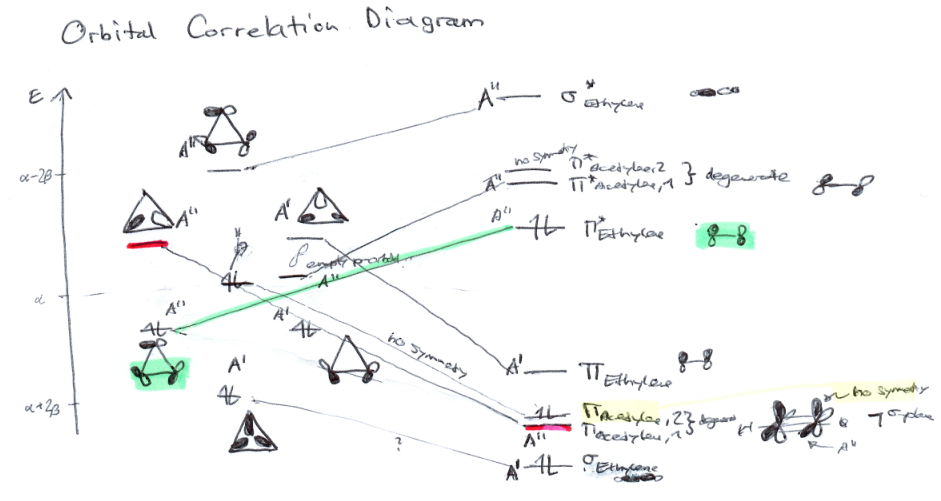 There are some points unclear to me:

What is the type of the ring opening; is it a concerted or radical based C-C bond cleavage?

This is a chelotropic reaction, a subset of cycloaddition\fragmentation reactions. As to whether it proceeds by a concerted or radical mechanism, well, you haven't presented any experimental data that can help us decide. For example, if the reaction had been run with the cis-2,3-dimethylcyclopropane analogue and both cis- and trans-but-2-ene were found among the products, we could argue for a biradical, two-step (non-concerted) process. When we create an orbital symmetry diagram, that just allows us to make a prediction as to whether or not we expect the reaction to be concerted.

There are a number of different conformations available to the molecule, but I agree with you that having the carbenic p-orbital aligned with the plane of the cyclopropane ring (the "bisected" conformation) should be favored. Just as the bent carbon-carbon bonds with high p-character in a cyclopropane ring stabilize the empty p-orbital in a cyclopropylcarbinyl cation (your drawing above), the same thing should happen here with the carbene's empty p-orbital.

I was asked to draw the orbital correlation diagram.

I have difficulty reading your diagram, so I created a new orbital correlation diagram. 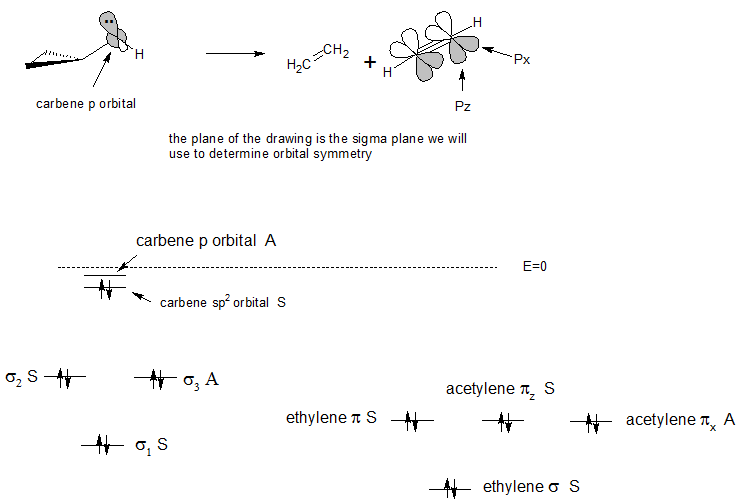 Let me say a few things about my figure in order to make it easier to understand.

How can we see in general from an orbital symmetry correlation diagram if a reaction is concerted or not?

Is it okay to say biradicaloid instead of carbene?

No, not really. "Biradical" is generally used in cases where the electrons are on different atoms. Like when we break a bond in cyclopropane we have a 1,3-biradical.

In the orbital correlation diagram I would predict the acetylene a little bit lower because of more s character (sp) than ethylene (sp2). May be the energy difference is roughly as high as the difference between carbene p orbital A and carbene sp2 orbital.

That may be, but in both ethylene and acetylene the pi electrons (which is what we are talking about) are in pure p orbitals. My guess was that they would have roughly the same energy.

For the retro cheletropic reaction I assume a photolytical pathway

The retro reaction, like the forward reaction, should be thermally allowed and photochemically forbidden.

According to the paper, I've found here...

Not the answer you're looking for? Browse other questions tagged organic-chemistry reaction-mechanism molecular-orbital-theory pericyclic or ask your own question.

3
Draw a simplified MO diagram for the pi system of Methyl vinyl ether
14
Is s-p mixing referring to hybridization or is it the mixing of one atoms s orbital with the other's p orbital?
32
Why does hyperconjugation help for ring cleavage?
14
What's the reaction type of the Hydrogen shift?
7
Which singlet dihalocarbene has the strongest carbon-halogen bond?
0
Singlet or triplet carbene
24
Theoretical basis behind orbital correlation diagram for pericyclic reactions
15
Molecular orbital diagram for BF3