I want to know if I can calculate the dipole moment of a molecule given the electronegativity values for the atoms comprising it.

Can the magnitude of how polar a molecule is be calculated from the difference in electronegativities among the elements comprising the molecule?

For example, in $\ce{CH4}$, the carbon atom is bonded to four hydrogen atoms. The electronegativity of carbon is 2.55, while the electronegativity of hydrogen is 2.2 This means that for each $\ce{C-H}$ bond, there will be a dipole moment from the hydrogen to carbon atom. However, since methane has a perfect tetrahedral structure, the four dipole moments cancel each other out so that there is no net dipole moment. Hence, methane despite having polar bonds, is actually not a polar molecule, shown below.

Another example that we can consider is ammonia, $$\ce{NH3}$$. Ammonia consists of 3 $\ce{N-H}$ bonds. The electronegativity of nitrogen is 3.04. That means that ammonia consists of 3 polar $\ce{N-H}$ bonds. The molecular structure of ammonia is trigonal pyrimadal and hence unlike methane, when you add up the 3 dipole moments, they don't cancel each other out. Instead, they result in a net upward dipole moment. Hence, the molecule itself is also polar, shown below 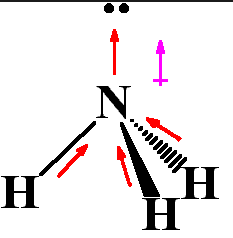 Not the answer you're looking for? Browse other questions tagged physical-chemistry electronegativity polarity dipole or ask your own question.