Since I calculate NMR spectra for a while by simply using one of recommendations by CHEmical SHIft REpository:

without thinking to much how it actually works*, there is a common misprediction that I'd like to understand.

It seems to be that the shift/shielding of the brominated carbons is always way off the measured shift. Compared to all other "normal" substituted carbons (C, H, O, N...) it is also far from being predicted good.

Luckily for me, as I don't want to show my own molecules :D, the Repository gives an example (Aplydactone) with a brominated carbon that shows exactly what I mean: 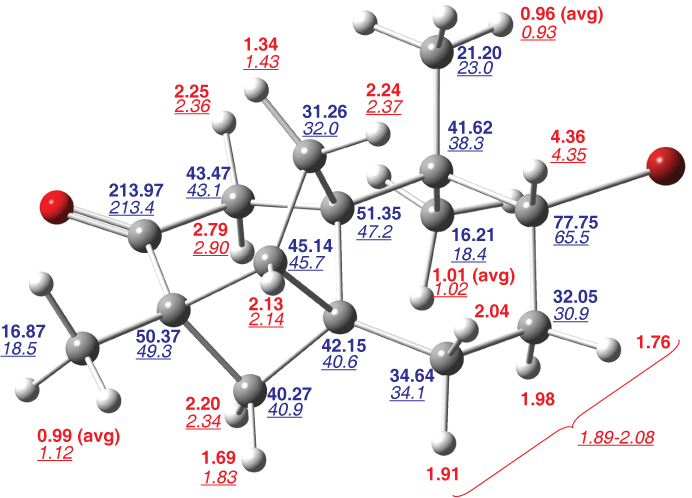 The overall $^1$H Mean Absolute Deviation (MAD) is about 0.08 ppm and for the $^{13}$C shifts the MAD is about 1.5 ppm but without the brominated carbon (right side of picture). The predicted shift has a failure of 12.25 ppm (measured 65.5 ppm vs. calculated 77.75 ppm) which is about ten times the MAD of all other carbon shifts.

Is there a common explanation for that? Is it simply that there were no brominated samples within the test set or is there a much deeper reason? Like Bromine must be treated with a different/super special basis set or sth similar.

This comes right now into my mind ... As there might already be some influences of the relativistic effect, could that be a reason?

Please tell me of your deeper insight into the calculation of NMR shieldings that could yield to this misprediction that I either understand how to correct those errors or that I at least have an explanation.

I did no further research throughout the internet yet, as I have not much time right now. But as this question keeps in my mind, maybe someone of you has done the research and would share it with me.

* I know that it uses a regression function which was calculated through comparing lots of experimental vs. predicted shifts for a bunch of small organic substances. What I mean is more the quantum theoretical aspect.
quantum-chemistry computational-chemistry nmr-spectroscopy
Share
Improve this question
asked Aug 6, 2015 at 16:22

The authors note in their review article* that such effects are expected as "heavy atom effects" due to electron-correlation effects and spin-orbit coupling: (references stripped for clarity)

This being said, one way to improve the computed chemical shifts of heavy-atom-bound carbon atoms is to utilize a method that better captures electron correlation effects, such as MP2 or higher-level methods along with correlation-consistent basis sets (see section 4.3). This will likely result in significant improvement for carbon atoms attached to sulfur or phosphorus as well as to halogens, although the improvement is expected to be greater for sulfur or phosphorus. Further improvement requires the use of methods that determine relativistic spin–orbit corrections. [...]

Another option for improving chemical shift calculations with heavy-atom errors is to utilize a linear regression method, as discussed in section 3.6. Due to the systematic nature of heavy-atom effects, they are amenable to improvement via this approach, provided that the linear regression data consists of nuclei similar to the nucleus of interest. That is, a linear correlation correction to carbon nuclei attached to a given number of bromine atoms, for example, should be derived from empirical data for other carbon nuclei attached to the same number and type of halogen atoms. In fact, this approach has been demonstrated specifically for such cases.

Both articles suggest ways to use DFT methods with empirical corrections that work fairly well.

Not the answer you're looking for? Browse other questions tagged quantum-chemistry computational-chemistry nmr-spectroscopy or ask your own question.

1
NMR coupling pattern for hydrocarbon
2
Benzene and proton in 1H NMR
4
How to explain two NMR spectra of the (allegedly) same compound with slightly different shifts?
4
Simulating H1 NMR spectra using chemical shift/multiplicity data?
17
Correlation between 1H and 13C shifts - coincidence or not?
5
Why do carboxylic acid derivatives show a more upfield shift than carbonyls in 13C-NMR?
7
Why are the calculated NMR values on the DFT & GIAO level of cyclopentane-1,3-dione so far off?
4
Chemical shifts of OH protons