Why are the majority of cleaning solutions basic?

When testing for pH for common household cleaning products, such as dishwasher fluid, I noticed that majority of them tend to be basic? Why is that? Do acid make good cleaning solutions as well?

If we approximate the food rests you want to clean away during the dishwashing as mixture of carbohydrate, proteins and lipids, then your dishwashing liquid needs that take care of those 3 substance classes in water.

Acids (usually acetic acid or citric acid, maybe HCl) are used in "household chemistry" to clean limescale (CaCO$_3$). But that usually isn't the problem of your dirty dishes.

Dishwashing machines use ion exchangers to soften the water (or phosphate in the dishwashing agent), so you don't get limescale or lime soaps inside the machine.

Dishwashing agents are usually anionic detergents—i.e. they are alkylbenzenesulfonates.
They consist of two parts:

The sulphonate ion bonds to water, while alkylbenzene bonds to oil, protein, or fat . Thus fats, oils, proteins, and grease dissolve in water

The following is the mechnism of a dishwashing agent: 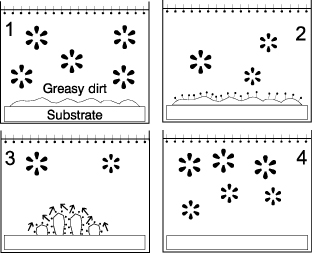 These are the ingreadients mentioned on a dishwashing bottle in my house: 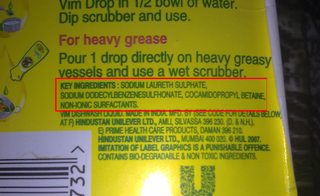 As you can see, sodium dodecylbenzenesulphonate (an alkylbenzenesulfonate) is one of the main ingredients.

Yes they can make a good cleaning solution, but not as a dishwashing agent.

Acidic washing agents are mainly used for removal of inorganic deposits like scaling. The active ingredients are normally strong mineral acids and chelants. Often, there are added surfactants and corrosion inhibitors.

Not the answer you're looking for? Browse other questions tagged acid-base everyday-chemistry ph or ask your own question.

6
What chemical reaction can cause this blue-ish deposit?
4
Alkalis and Bases
1
Finding pH using the -log, why does my calculation differ from the book's answer?
1
Why hot water is more effective than cold water in cleaning
3
Why can't the strength of superacids be measured in water?
9
Why are acetic acid and sodium bicarbonate mixed to unblock a drain?
0
Why are some weak acid equilibrium approximations invalid in very dilute solutions?