Why do BH3 and NaBH4 have different selectivities?

I've always known borane ($\ce{BH3}$), as a reagent for alkene hydroboration. Recently in class we talked about its use in the reduction of carboxylic acids to alcohols as well.

Now obviously $\ce{BH3}$ is an electrophile and I don't think it reacts by donating hydrides like sodium borohydride ($\ce{NaBH4}$) does - in any case it's not charged like $\ce{BH4-}$. Also $\ce{BH3}$ should be a pretty weak hydride donor, considering the covalent nature of the bonds and lack of any charge. It can reduce carboxylic acids, however, which $\ce{NaBH4}$ can't do! Where's the difference and what's the reason for this contradiction?

And what prevents borane from reducing acid chlorides (my instructor told me this)? This is something $\ce{NaBH4}$ is successful at.

Your assertions are correct, for the most part. $\ce{BH3}$ is a Lewis acid, and it does not reduce carbonyl groups by directly donating a hydride group like $\ce{NaBH4}$ does. The $\ce{NaBH4}$ reduction mechanism is fairly short and involves a direct transfer of the a hydride ion to an electron deficient carbonyl carbon: 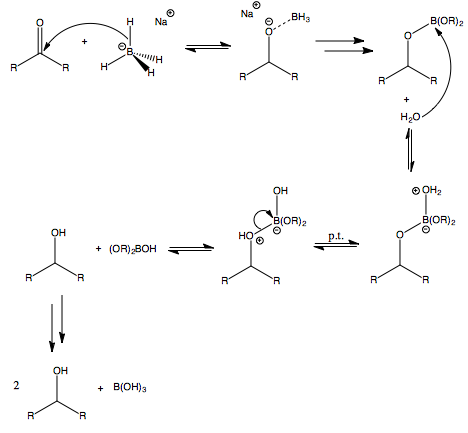 $\ce{NaBH4}$ is incapable of reducing carboxylic acids only because the acidic hydrogen is more reactive towards the hydride ion than is the carbonyl carbon. It is, in fact, capable of reducing carboxylate anions to primary alcohols, though the reaction is very slow. Electron-rich carbonyls favor reactions with electrophilic reducing agents. To help in understanding what makes a carbonyl electron-deficient or rich, let us consider the contributing resonance structures of amides, esters, and acid chlorides:

The $\ce{BH3}$ reduction mechanism is quite a bit longer and has some interesting intermediates, but here it is: 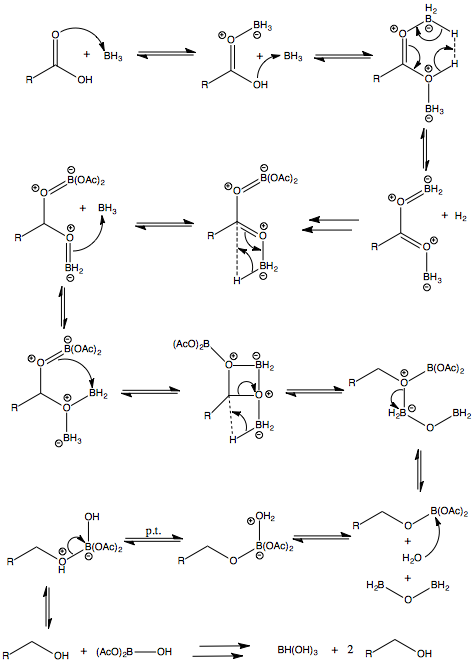 Note that this mechanism does in fact include hydride transfers (it has to). Though you were right in thinking that $\ce{BH3}$ wouldn't immediately donate a hydride, coordinating to a lone pair weakens the $\ce{B-H}$ bonds and makes hydride transfers possible. $\ce{BH3}$ and $\ce{NaBH4}$ really aren't as different as you might first think.

Though $\ce{BH3}$ is more reactive towards electron-rich carbonyls, it is also capable of reducing electron-deficient carbonyls like acid chlorides and esters through similar pathways. This should show you that there isn't any contradiction here, and that just because two compounds have different reactivities does not mean that they cannot perform the same type of reactions—they just won't perform it in the same way.

Not the answer you're looking for? Browse other questions tagged organic-chemistry reaction-mechanism redox carbonyl-compounds chemoselectivity or ask your own question.

12
How many hydride ions are available in NaBH4?
6
Why NaBH4 does not reduce carboxylic acid while LiAlH4 does?
1
Reaction of methacrylic acid with BH3
4
What is the mechanism for the hydrolysis of the boron-alkoxide complex in NaBH4 reduction?
2
Why do DMSO and acetone have such radically different melting temperatures?
1
Graphical representation of reductive powers of NaBH4 and LiAlH4?
1
Reaction of hydrazine and hydroxylamines with carboxylic acids
8
Reduction of nitrobenzene with LiAlH4 and NaBH4