I was doing some IR calculations on different 3d transition metal carbonyl complexes during some practical courses where we were introduced to effective core potentials. While doing this we found that MP2 has some problem with the calculation of at least the asymmetrical $\nu_\text{CO}$ band (that was the only one we were interested in).

The following graphic shows that most of the calculated values are acceptable and near their experimental values but two of them, namely $\ce{[Co(CO)4]-}$ and $\ce{[Fe(CO)4]^2-}$ differ significantly from the experimental values by nearly $300\ldots1000~\mathrm{cm^{-1}}$. 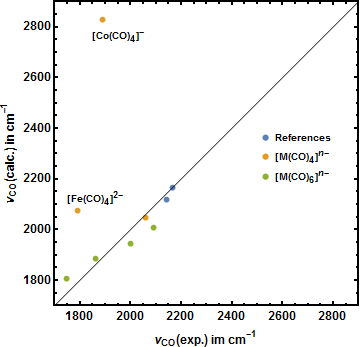 After this I varied some parameters of the calculation that could influence this deviation as was:

What can be seen:

What are your ideas why MP2 fails with this special task?

Some months later but here we go...

I agree with most of the comments that multiconfigurational effects should be present for this system, and maybe they are very strong. But I tend to think that this is not the cause of the huge difference with experimental values. The fact that B3LYP returns reasonable values should be taking into account. Surely it "could be" just a coincidence but let's face it, I is very unprovable that all the results are reasonable due to coincidence (it is very simple to check it out, just try some others well proved functionals).

My guess is that you found the correct nuclear coordinates for the minimum of the PES, but the SCF part of the calculation have serious problems and it converged to some unreasonable electronic "state". This would imply that the MP2 results are ridiculous. As HF and B3LYP are very different in the SCF part, B3LYP converged correctly.

You could try different initial guesses (Hückel, PA, a previous converged calculation) and different methods (like RHF, OHF, UHF etc.). Other basis sets can also help (a little larger if possible). I would try to avoid effective core potentials! (I understand that this can be a problem for your teaching purposes). Convergence method is of course of main importance (consider quadratic or very damped convergence) . I found almost impossible that calculating inner electrons correlation helps in this case.

Of course that the refinements that you tried are useful, but I think that just to improve quantitatively the results.

I hope that the ideas above help you. I would like to know if you effectively solved your problem.

Not the answer you're looking for? Browse other questions tagged quantum-chemistry computational-chemistry carbonyl-complexes or ask your own question.

28
Suggest methods and basis sets for a variety of systems
13
Why does bond length decrease with increased basis set quality for SCF methods?
17
Why do post-Hartree-Fock methods fail to predict the direction of the dipole moment of carbon monoxide?
2
High errors in frontier orbital energy calculation using DFT
6
Can density functional approximations including dispersion correction perform worse than without it?
7
How to interpret the relation between CO stretch frequencies and backbonding strength for polycarbonyl compounds?