Can our chemical elements be differents on other universes? [duplicate]

Is this a possible scenario?

I admit this question is far out of my depth, but it's interesting enough that I feel I should give it a shot.

TL;DR - The question is so hard as to be almost unanswerable in detail. Things can be very different, though not arbitrarily different, and the exact line between the two is very difficult to define. There have been some mild investigations on the chemistry of toy universes, however, one of which I describe below.

The problem with thinking about other universes is that there are potentially a lot of different universes which can arise. Famously, string theory currently posits that there are something like $10^{500}$ "valid" universes, each with different details regarding physical laws and physical constants. Furthermore, universes are very complex objects in the sense that there is a ton of interrelation between everything, so even minor changes to details can create wildly different results. Not just that, but there apparently are many parameters to fiddle with, which would create wildly different periodic tables, often apparently breaking any possibility of life. This all leads to fine-tuning problems.

For example, if the attraction between two protons were about 2% larger, then every proton in the Universe would be bound in the form of a diproton nucleus, i.e. the nucleus of helium-2 ($\ce{^2He}$, which is just barely unstable in our Universe), meaning the entire periodic table would collapse to a single element. Apparently there's no very interesting chemistry in that universe! Now, what exactly would have to be tweaked in order to get a 2% stronger attraction between protons while not breaking everything else, I don't know.

So it seems thinking about chemistry in different universes is far too complicated to approach in almost any situation, but still there are some investigations. One particular case I have come across is what would happen in a universe without weak interactions.

Most of Chemistry ultimately has to do with studying different aspects of electromagnetic interactions. However, the stability of atomic nuclei depends immensely on strong interactions (aka strong nuclear force), and to a lesser extent on weak interactions (aka weak nuclear force). The authors in the article linked above analyzed the effects of taking a universe similar to ours, but removing the weak interaction. There are several differences with respect to the evolution of the universe (big bang nucleosynthesis, stellar nucleosynthesis, etc) and the abundance of the elements, but thinking just about their stability, it seems that in such a universe, a large portion of the periodic table would still exist.

Additionally, given that the weak interaction mediates the decay of neutrons in our Universe, its absence means neutrons are completely stable subatomic particles (in our Universe free neutrons decay with a half-life of around 8 minutes). This also means that neutron-rich nuclei are more stable to decay in the hypothetical weakless universe. In our Universe, deuterium ($\ce{^2_1H}$)is the most neutron-rich stable hydrogen isotope, while tritium ($\ce{^3_1H}$) is stable enough, with a half-life of about 11 years, to be chemically important (heavier hydrogen isotopes can essentially be neglected). However, in the weakless universe, it seems that even hydrogen nuclei as rich as $\ce{^6_1H}$ are indefinitely stable, and there are possibly even more neutron-rich isotopes. See the following figure: 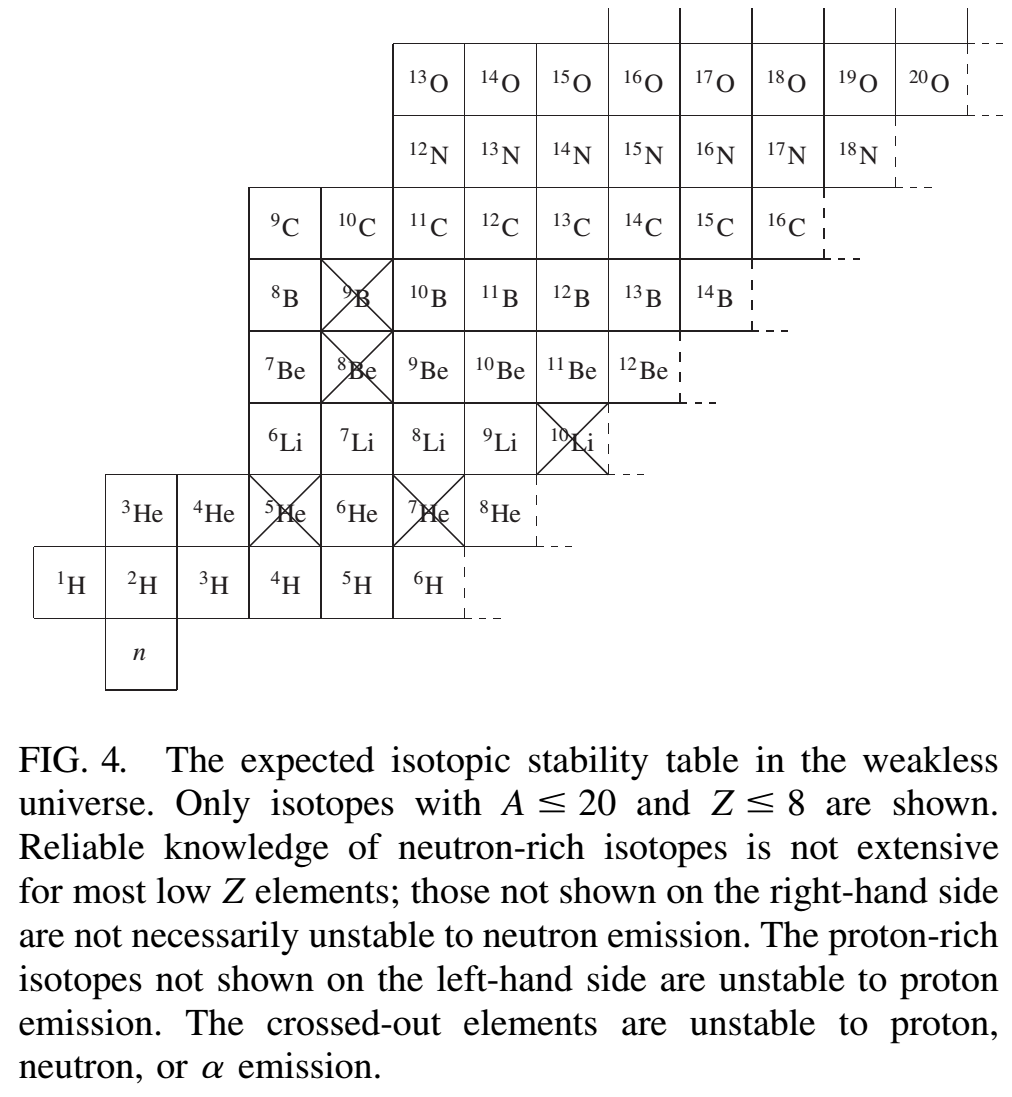 Due to this added nuclear stability, the periodic table in the hypothetical weakless universe could actually have more stable elements in it. In our Universe, elements beyond about the 110th are quite unstable, being produced naturally in small amounts, if any, and they will not likely have great significance in Chemistry. However, highly neutron-rich nuclei could make ultraheavy elements more accessible, even in natural conditions such as supernovae.

@NicolauSakerNeto has nicely covered the possible effects that a change in nuclear physics would have on the periodic table. I wanted to point out two other possibilities: a different spin for the electron, and a massive photon.

Now, bosons (unlike fermions) do not obey the Pauli Exclusion Principle; in fact, they are more likely than not to be found in the same state. (This is a consequence of something called the spin-statistics theorem.) This means that a Universe in which the electron was a boson would be a very boring universe indeed; instead of filling orbitals in a sequential way, every "electron" would be in the ground state of the atom. (This neglects interactions between the electrons themselves, but this would be a good first-order approximation.) You therefore wouldn't get unpaired electrons in orbitals like you do in our Universe; bonding between atoms, if it exists in this Universe, would be very different from our own. My guess would be that you'd effectively have a Universe full of noble gas atoms, with nothing around that wasn't monatomic.

A Universe with a spin-3/2 electron would be more interesting. These do obey the Pauli Exclusion Principle; and so every electron in an atom would need to have a different set of quantum numbers. However, you could now have four electrons in every orbital ($m_s = -3/2, -1/2, +1/2$, or $+3/2$); and so the periodic table would look very different indeed. I wouldn't want to hazard a guess as to what it would look like in the end; the filling order of the orbitals would be very different in this Universe, and it would be a hard question to determine (for example) how many electrons would go into the $2s$ orbital before the $2p$ orbitals started to fill.

In our Universe, the photon is a massless particle; through the magic of quantum electrodynamics, this leads to the familiar Coulomb potential for an electron orbiting a proton: $$ U(r) = - \frac{Ze^2}{r}. $$ However, if the photon had a mass, then this potential would be replaced by something called the Yukawa potential: $$ U(r) = - \frac{Ze^2}{r} \exp{\left(-\frac{mc}{\hbar}r\right)}. $$ In particular, the Yukawa potential (unlike the Coulomb potential) does not allow for bound states with arbitrarily large angular momentum; there is a maximum possible angular momentum above which no bound states exist. This would again change the structure of the periodic table drastically. The filling order of the orbitals would certainly be changed. It's not even clear to me that a heavy nucleus (with atomic number $Z$) would necessarily always have $Z$ orbitals for electrons to fill, and so you could end up with the odd effect of heavy atoms tending to exist as charged ions rather than being neutral.

1
Could we possibly discover new extraterrestrial elements and minerals?
12
Does hydrogen really have seven isotopes?

0
Can you determine whether a compound can form given particular elements?
0
"Orthogonality" of chemical elements
2
Reading number of outer shell electrons and other properties from periodic table?
3
Atomic weight = expected weight?
11
Elements other than carbon that can form many different compounds by bonding to themselves?
8
Naming of the chemical elements and original sentences by the discoverers