Why does zinc sulfide glow?

Zinc sulfide is used in road signs because when light from cars hit the road signs, it glows. What actually is the reason for the glowing of road signs (actually glowing of $\ce{ZnS}$)?

In the Wikipedia article Phosphorescent paint,

Phosphorescent paint is commonly called "glow-in-the-dark" paint. It is made from phosphors such as silver-activated zinc sulfide or doped strontium aluminate, and typically glows a pale green to greenish-blue color. The mechanism for producing light is similar to that of fluorescent paint

The process is summarised in the article Fluorescence vs. Phosphorescence, The explanation from the article:

The website has a diagram exhibiting the process (in a bit of a simplistic, but understandable way - just replace the 'UV' with 'car headlights etc'): 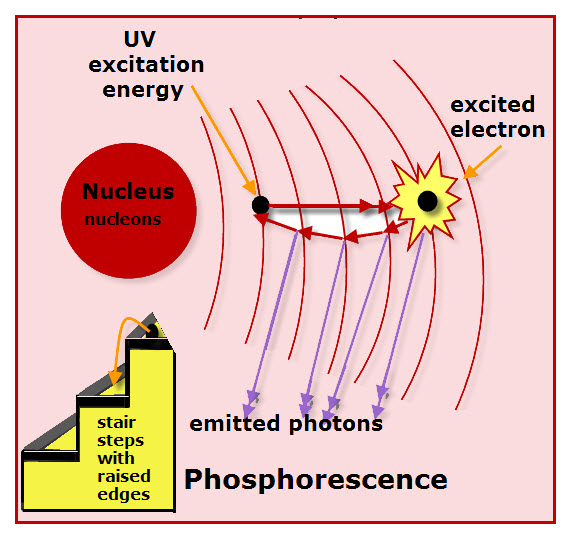 Not the answer you're looking for? Browse other questions tagged inorganic-chemistry everyday-chemistry optical-properties or ask your own question.

0
Why does zinc sulfide glow when hit by electrons?
2
How do things glow in the dark?

2
Role of acetate ion in formation of hydrogen sulfide ion from thioacetamide
3
Why does ammonia "clean" scratches?
8
What makes scorpions glow under UV light?
10
Why does a pickled gherkin glow only at one end when a current is passed through it?
5
Phospors and Phosphorus
4
Does double replacement reaction only happen to aqueous reactants?
6
Sodium Chlorite Listed as Active Ingredient in Anti-Fungal/Anti-Bacterial Fish Medication