Is there any chemical that can destroy PTFE or Teflon?

Polytetrafluoroethylene was discovered by accident. It now is an important material in the industry mainly because of its extremely high bonding energy, which prevents corrosion, halts reaction, and reduces friction (yeah carbon-fluorine bonds!)

And people would have definitely put it to the test, making it contain some of the most vicious and chemically diabolical substances ever created. There is a whole HOST of items it can contain that some chemists have gone so far as to say they were 'evil':

...There are a lot of other chemical demons it can contain, but this is not the point. Let this suffice: Chemical Resistance Comparison (Spoiler: Fluorine is good at this corrosion thing.)

With this kind of hyper-resistance to about anything chemically destructive, is there anything that can destroy Teflon through only chemical means? A chemical that reacts exothermically to release heat, which melts the PTFE does not count. You get the drift.

Now I know that some, but very few, solvents can make a mark on Teflon; but my question has not been answered: Is there any more resistant substances? 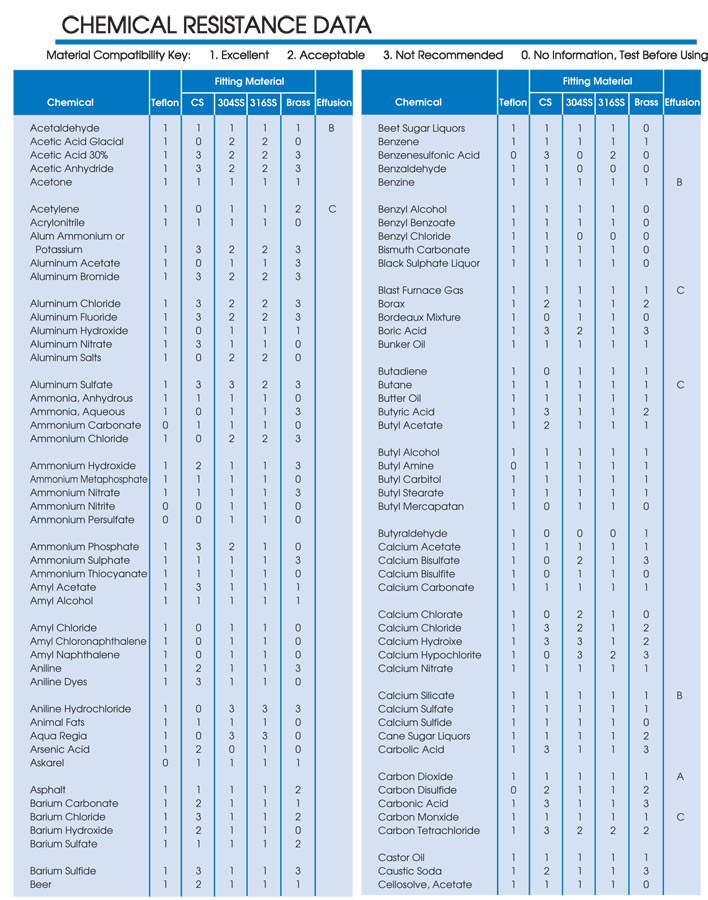 Corrosion Resistant Products, Ltd., with the help of Dupont, has established this source of information on what can and cannot eat teflon.

These reactions probably reduce PTFE in a manner that starts:

Similar things can occur under extreme conditions (temperature and pressure) with:

Just to add a bit to Ben's excellent answer...

The formation of $\ce{MgF2}$ is extremely exothermic. The heat given off along with the carbon soot provides a new, much hotter, target for the attacking missile to lock onto.

As to whether there is anything more resistant, I suspect that is unlikely. The $\ce{C-F}$ bond is shorter (135 pm) than the $\ce{Si-F}$ bond (160 pm) and therefore better serves to encase and protect the carbon backbone. While there are some other polymers that have better mechanical or thermal properties, I am not aware of any that have better chemical resistance. In Polymers for Electronic & Photonic Application from 2013, the author states, "PTFE is the most chemically resistant polymer known".

I am aware that this answer does not describe a ‘chemical that can destroy PTFE’. However, since you are also asking ‘is there anything that can destroy Teflon through only chemical means?’, and in order to complete the other answers, I would like to add that PTFE can be easily destroyed by means of radiation chemistry. (Radiation chemistry is the study of the chemical effects of radiation on matter. It is not to be confused with radiochemistry, which is the chemistry of radioactive materials.)

PTFE is exceptionally sensitive to radiation. PTFE experiences significant damage at lower radiation exposure levels than other polymers. In general, PTFE is considered usable without any significant restrictions only for absorbed doses of up to $100\ \mathrm{Gy}$.

The general radiation effects on polymers are formation of gas, cross-linking of polymer chains, and scission of polymer chains. In contrast to most other polymers, all hydrogen atoms in PTFE are substituted by fluorine atoms; therefore, the elimination of hydrogen or hydrogen fluoride and the corresponding formation of double bonds do not occur. The elimination of fluorine due to $\ce{C-F}$ bond break is possible; however, since $\ce{C-C}$ bonds are clearly weaker than $\ce{C-F}$ bonds, $\ce{C-C}$ bond break predominates. Therefore, the primary effect of radiation on PTFE is the scission of the polymer chain (breaking of the large polymer molecule into smaller parts). Due to the absence of π-electrons, the excited states are not particularly stabilized, resulting in high radiation-chemical yields. Because of the absence of unsaturated bonds, the absence of functional groups that can be easily eliminated, and the general chemical inertness, PTFE cannot be cross-linked like an elastomer. Therefore, the scission of the polymer chain is not compensated for by the formation of new bonds. With advancing chain scission, the molar weight of the polymer is dramatically reduced from an initial value of about $6\times10^6\ \mathrm{g\ mol^{-1}}$. It is divided by $4$ after $250\ \mathrm{Gy}$ exposure and by about $20$ for a dose of $1000\ \mathrm{Gy}$.*

The effect of molecular weight reduction is primarily on mechanical properties. Tensile strength is reduced by $25\ \%$ after $500\ \mathrm{Gy}$ exposure and by $50\ \%$ for a dose of about $900\ \mathrm{Gy}$. For doses above $1500\ \mathrm{Gy}$, imminent material failure has to be assumed because of a brittle behaviour with unstable crack propagation.

A PTFE surface can be chemically altered for bonding to other materials by solvated electrons in liquid ammonia (leaving the bulk PTFE intact). Classically alkali metals have been used for this, but a more controlled reaction is obtained from an electrolytically generated magnesium solution [Ref. 1]. From the abstract:

Similar polyflourines have been decomposed by ball-milling PTFE with dry potassium hydroxide. There s an interesting article by Zhang et al. [1] which is really informative and makes me thing that PTFE would respond similarly. Everything breaks down to the mineral elements with no nasty interims formed. The energy and pressure of the steel balls smashing the KOH into the polyflourines causes the reactions to go with no aqueous stage needed. It could be the answer to reducing the PTFE waste impact on the environment.

It is a minor point to an excellent question and post, but are you considering pH and Hammett Acidity Function as the same thing for superacids here? The molarity of protons required to have a pH of -25 is pretty mind-boggling. I think given the common confusion over pHs under 0 it's an important distinction to point out. Without doubt H2FSbF6 is going to pH somewhere in the negatives in many, many hydrofluoric diluted concentrations, but the only real way to rate with specificity it is with Hammett. And it could certainly be found to be in the range you ascribe its pH to.

As far as materials that can chemically attack PTFE, in my work in the agrichemical manufacture industry I've yet to come across one, however I find it interesting that when designing piping for concentrated HCl PTFE is consistently rated a 'good' choice for gasketing and EPDM is rated 'better.' Is there a worry with prolonged concentrated HCl exposure? I'm answering a question with a question and my name isn't Socrates, so I apologize, but it is something I've wondered in passing.

HF can attack PTFE slowly, but once it gets going, it can self-propagate. The PTFE decomposes to more HF, which then attacks itself. I find it ironic that PTFE is listed as a container for hydrofluoric acid, but the PTFE is slightly permeable to the acid.

23
Please explain why dioxygen difluoride is so dangerous
12
Is there a way to contain fluorine gas for long term so that it can be visually observed?
15
Are PTFE stir bars resistant to all lab solvents?
3
Does a sulfuric acid/nitric acid mixture dissolve PTFE (ie. teflon)?
5
Storage of the Halogens in PTFE Bottles
-1
Do all anhydrous organic matter burn?
2
What is ultimate decomposion product of Teflon (PTFE) in environment

10
Are there any general chemical rules for choosing initiators for a polymerization reaction?
0
What chemical that when cured chemically cross-links to already vulcanized rubber
0
ELI5: What is the effect of ultrafine Teflon (PTFE) particles in rats and mice