Relation between number of conjugated double bonds and absorbance? [duplicate]

I observed the absorbance on Phenolphthalein in acidic and basic medium, and I know that the absorbances differ due to the number of conjugated double bonds, but I am not sure exactly why this happens. I believe it has something to do with the delocalised electrons, which causes lower energy differences, but I am unable to establish a solid link between the concepts. Why does this happen?

When 2 p orbitals mix, a pi and a pi* orbital is formed, and the electrons occupy the lower energy pi orbital. The UV-absorbance is the energy difference between these two orbitals such that on electron may be 'promoted' to the p* orbital.

When 3 p orbitals mix, three pi-type orbitals are formed. One is obviously bonding and one is obviously antibonding. There is a third one 'in the middle', frequently called non-bonding. Because of this third orbital, there is a smaller difference between any two states, and as such absorbing a photon to promote an electron requires less energy, redshifting the absorbance.

Check out this picture for a graphical summary: 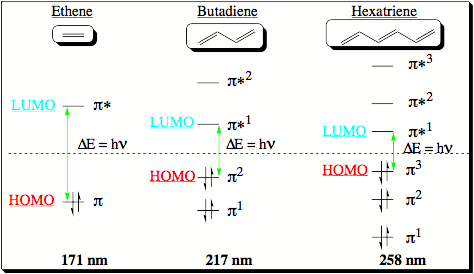 20
Why does the energy gap for π - π* transitions shrink with the size of the pi-conjugated system?

0
Difference between an absorbance, emission, and excitation spectrum for uv-visible spectroscopy
4
Proportionality between number of absorbed photons and optical density
1
what is the difference between excitation and emission spectroscopy?
2
How do you calculate the equilibrium constant with the absorbance of a substance and the absorbance constant?
2
IR spectra and hydrogen bonds
3
Why does the reduction of NAD+ to NADH change the absorbance so much, and cause fluorescence?
2
Why is the force constant for double and triple bonds approximately double and triple of that of a single bonds?
1
Determination of pKa by absorbance and pH of buffer solutions
13
Relationship between the symmetry number of a molecule as used in rotational spectroscopy and point group