Consider this picture of an $\ce{NaCl}$ unit cell:

It appears to show 14 $\ce{Cl-}$ ions and only 13 $\ce{Na+}$ ions. Given that discrepancy, how is table salt balanced for charge? Why isn't there a charge excess?

The picture you showed does have an unequal number of sodium cations and chloride anions. However, the picture shows only part of a crystal. Every atom that is on a boundary of the shown cube, whether on a face, edge, or vertex of the cube, is shared with other "cubes" in the crystal that aren't shown in the picture.

You might be thinking that this math checks out only insofar as a crystal is actually infinitely sized. And you may have noticed that no salt crystals are infinitely big in the real world. These things are both true. But even tiny specks of salt crystals are gigantic relative to atoms. The surface of a salt crystal could involve imperfections that mean that the count of sodium atoms and chloride atoms aren't precisely equal. But instead of 14 vs. 13, the difference is more like 100,000,000,000,000,000 vs 99,999,999,999,999,999. And since the imperfections are at the surface, on the outside of the crystal, any charge imbalance can be corrected if an opposite-charged particle from outside the crystals floats by and neutralizes the extra charge from the extra atom.

Unit cells demonstrate alignment and relative position of atoms within a crystal but provide no overt stoichiometric information. The unit cell model isn't meant to imply that atoms group to form these individual cubes or shapes. As such, the atoms/charges won't necessarily balance.

In the case of NaCl, the face-centered cubic unit cell has an odd number lattice points and thus doesn't include a whole number of NaCl molecules. This is not, however, among the three unit cell criteria:

A quick way to see what is going on without calculations is to move the origin of the unit cell a bit to the top, right, and back. This way, the atoms on the bottom face, on the left face and on the front face are no longer in the unit cell, and the eight atoms in the top-right-back corner are no longer shared by other unit cells. At the same time, because we did not move it far, no atoms that used to be outside the cell are move into it, so we only have to consider atoms that were in the OP's picture.

This way, we can count as we are used to (one atom is one atom), and conclude that there are four sodium ions and four chloride ions in the unit cell. Here is a picture (the shaded atoms are the ones we have to count): 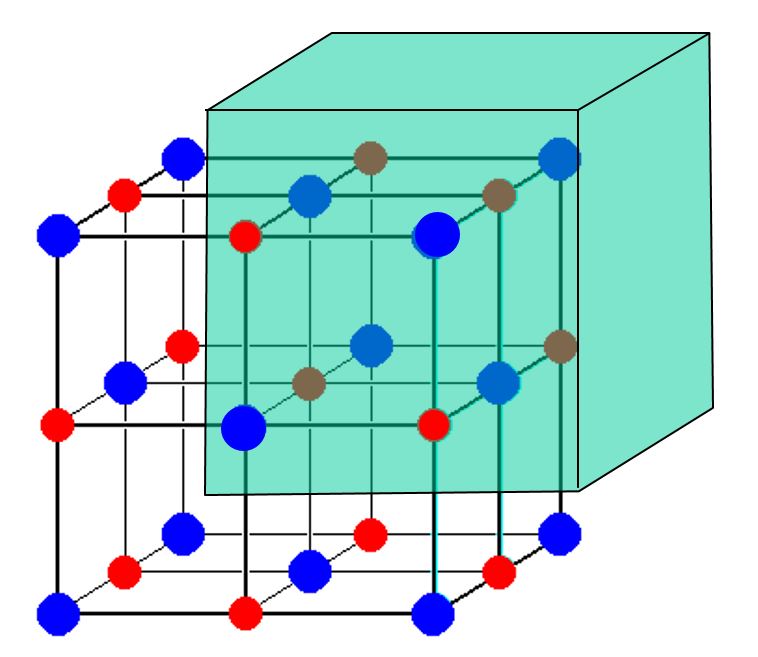 There are several ways of determining stoichiometric formula from the known unit cell.

Perfectly covered in the answer by Curt F.; I would only like to propose to use data in a tabular form in order not to miss any of the atoms or improperly assign their environment. Briefly, not all the atoms you see on your image belong to the unit cell 100%. From a $3 × 3 × 3$ packing diagram there are $3^3-1 = 26$ neighboring equal unit cells sharing their boundary atoms: 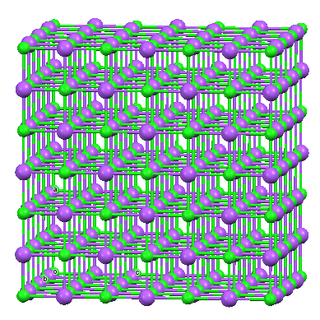 The share rates (let's denote it $α$) are the fractional numbers from $1$ to $1/8$ and are the same for any unit cell (not just cubic) and only depend on atom's relative location within the unit cell.

In order to adjust for the real number of atoms $N_\mathrm{cell}$, one has to multiply numbers of observed atoms $N_\mathrm{obs}$ by their share rates $α$. It's convenient to make a separate table for every crystallographically nonequivalent atom:

Often for the simple inorganic compounds it's sufficient to find the ratio between coordination numbers (C.N.) of cations and anions to determine the formula unit. For a simple binary compound $\ce{M_mX_n}$ the following simple proportion is valid:

For instance, from the crystal structure of sodium chloride it's evident that both $\ce{Na}$ and $\ce{Cl}$ have octahedral environment, and their main C.N.s are 6: 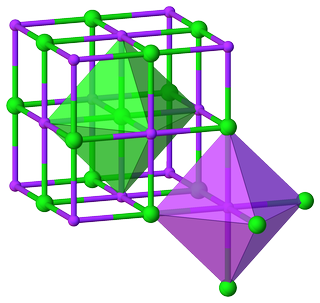 This method also works for not so primitive structures containing more than two different elements. It is also more used in reverse to determine C.N.s in tricky cases. For instance, in the structure of perovskite both $\ce{Ca}$ and $\ce{Ti}$ have well-defined primary C.N.s 12 and 6 (respectively) seen at the first glance at the content of the unit cell, whereas it's unclear what average C.N. oxygen must have. But, knowing the formula of perovskite ($\ce{CaTiO3}$) and using the relation between coordination numbers and stoichiometric coefficients, one can find that $\text{C.N.}(\ce{O}) = 6$:

Not the answer you're looking for? Browse other questions tagged inorganic-chemistry crystal-structure stoichiometry or ask your own question.