Is there any way through which I could selectively reduce one $\ce{NO2}$ group from a dinitro- or trinitro- compound to an amine.

I was reading Solomons and Frhyle and it says that m-dinitrobenzene can be selectively reduced by using $\ce{H2S}$ in aqueous or alcoholic ammonia. It also says that when it is carried out with 2,4-dinitrotoluene it leads to reduction of the 4-nitro group.

So, is there any way to predict which nitro group will be reduced, and/or any mechanism related to this. I have been frantically searching in books and even an internet article would suffice.

After having gone through three pages of Google Scholar and reading several research papers looking for an answer, there is definitely no way to predict the product here for every general case. The most detailed paper on the topic of Zinin reduction by far is Porter, H. K. Organic Reactions 2011, 455–481 (link). Even this paper went as far as to say that (p458):

It is evident that much remains to be learned about the mechanism and that studies using modern techniques and instruments would be desirable.

However, it does give reasonably detailed examples of of selective reduction of substituted dinitrobenzene which are worth mentioning. To begin with:

In substituted dinitro- and trinitro-benzenes, the least hindered nitro group is preferentially reduced. 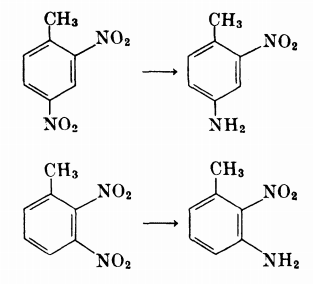 In dinitro- and trinitro-phenols and their ethers, a nitro group ortho to hydroxy or alkoxy is preferentially reduced. 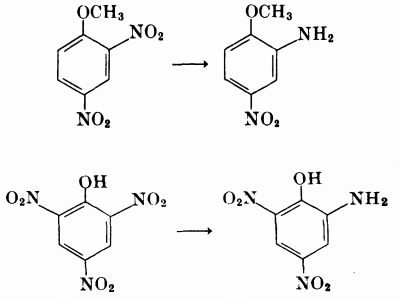 This is the most you need to know about this reduction. The other details are more technical, and are attached below are interested readers.

In the end of the paper, Porter has provided huge tables detailing several (substituted) mono-, di-, tri-nitrobenzene derivatives and their major products on Zinin reduction. So, I studied nearly a hundred different reductions through those tables, and tried to devise other reasonable ways to predict the major product than the two already mentioned above, especially in asymmetrical polynitrobenzene derivatives. I've not listed below mononitrobenzenes since they have only a single nitro group to be reduced. Further, symmetrical polynitrobenzenes (like 2,4,6-trinitromesitylene) have all their nitro groups equivalent, so the product obtained on reduction of either group is same. I've ignored biphenyls and napthalenes in my calculations to keep results simple. Further, exceptional products are not listed here, as they have already been detailed in the paper (p460-p464 under "Side reactions").

The following findings may be used to predict the major product in simple polynitrobenzene derivatives. Keep in mind that exceptional side-reactions do occur, so the prediction may not always be accurate. Yet, a substantially large list of predictable products is obtained as shown below. Examples of compounds are enclosed in parentheses.

There are a few cases which I was unable to resolve. The author has not noted them as an exception either. Suggestions are welcome:

I believe this is a reasonably detailed analysis of the selective reduction of the polynitro compounds.

The name of the reaction of reducing di/trinitrobenzenes to di/triaminobenzene is called Zinin reduction. The reaction is carried out using sulfur anion (sulfide, hydrosulfide and polysulfides) or aqueous ammonium sulfide was used in this work which is basically hydrogen sulfide in aqueous or alcoholic ammonia.

The basic equation of the reduction is given below:-

Although many published works on Zinin reduction exist, the exact mechanism of this important reaction is still not clear. The first product probably is a nitroso compound, which is rapidly reduced to hydroxylamine and then to amine . The rate-determining step is considered to be the attack of negative divalent sulfur on the nitro group, because no intermediate compounds are observed to be formed during the reaction.

Zinin reduction was discovered by a Russian organic chemist Nikolay Zinin in 1842 (Wikipedia) and revieved by Porter (1973; Ref.1). As pointed out by @Gaurang Tandon and @Nilay Ghosh in their answers, this reaction gives the best chance to convert polynitro aromates like 1,3-dinitrobenzene to 3-nitroaniline by selectively reducing one nitro group with sodium sulfide ($\ce{Na2S}$) or other derivatives of $\ce{H2S}$. My only intention here to give few more examples, which may help to deduce a reasonable mechanism for the reaction.

Preparation of 2-Amino-4-nitrophenol has been successfully achieved by selective reduction of 2,4-dinitrophenol using $\ce{Na2S/NH4Cl/aq.NH4OH}$ at $\pu{85 ^{\mathrm{o}}C}$ (Ref.2: It was noted that if the reaction is run at temperatures below $\pu{70 ^{\mathrm{o}}C}$, it is impossible to obtain a pure product even after several recrystallizations):

Based on above analysis, one can conclude that $\ce{Na2S\cdot 9H2O/S8}$ is a superior reagent to selectively reduce one nitro group in poly nitro compounds.

Not the answer you're looking for? Browse other questions tagged organic-chemistry reaction-mechanism amines nitro-compounds or ask your own question.