Can molecular structure be determined without modern characterization methods?

Molecular composition can be determined in some "primitive" ways (1, 2). What about the molecular structure? Is there a way to know what's bonded to what without spectroscopy etc.?

By "modern" I mean any method that emits and detects particles (photons, electrons, etc.).

Structure elucidation via degradative studies and decomposition chemistry has sadly all but passed from the chemists' toolbox, but this was the method once used to determine molecular structures up until about half a century ago. One of my very favourite examples that I use to teach structure determination by NMR is the story of strychnine. Strychnine (below) is by no means a trivial structure; it is hard enough to solve by 'modern' spectroscopic means. The story of how Robinson and Woodward, standing upon the shoulders of those before them, unravelled the the structure of this alkaloid over a decade and a half is an intriguing story, and one well worth investigating further. (AMBIX, Vol. 48, Part 3, November 2001) 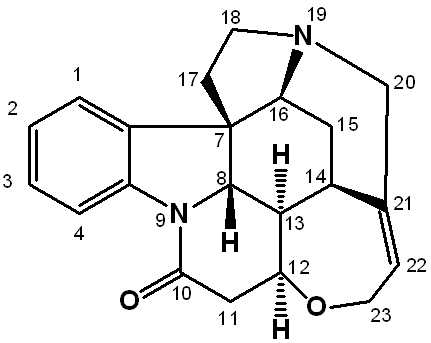 Essentially, the structure is slowly pieced together through a series of degradation reactions. It is a methodology that relies on chemical processes, reactivities and properties only. For instance, it was worked out in the late 19th century that strychnine contained an amide as a lactam through a hydrolysis reaction to give strychnic acid. Were it not a lactam, two separate products would have been formed, rather than the one. Suggestions of the quinoline skeleton came from the reactivity of a dimethyl derivative in a series of chemical tests. Over the next 20 or so years, this was revised and superceded by more likely candidates. So on and so forth over a number of years, each little piece of the puzzle is fitted together, all through the lengthy process of chemical reactions to give smaller easier to identify products. A number of complicated framework structures were proposed, mulled over and discarded for a number of years, and final structure was tested through total synthesis reproduction. This whole process requires an incredibly talented chemist, and it simply makes my mind boggle at the thought of how these guys operated.

And though, it can be argued that UV spectroscopy did play a role in the final jigsaw piece in 1947, the correct structure was proposed by Robinson in 1942, and total synthesis confirmed this in 1954.

This is just one example of determination of molecular structure through degradative or decomposition chemistry, and many complicated structures were determined this way. Thank goodness for high field NMR.

7
How to determine the structure of organic molecules without spectroscopy
1
How did early chemists determine the major product of a solution?
21
How were elements and molecular formulæ determined in the old days?
4
How can an Organic chemist know the chemical formula of a natural product she isolated from an organism?
2
How were the first molecular formulas determined?

21
How were elements and molecular formulæ determined in the old days?
2
How were the first molecular formulas determined?
3
Detection of magnesium in a buffer?
3
Determination of timescales using characterization methods
4
How will my studies in mathematical statistics be applied to and assist me with problems in chemistry?
7
How to choose a proper chromatography method to separate substrates?
7
Optional determination techniques in Atomic Absorption Spectroscopy