Why is propanoic acid weaker than butanoic acid?

I was reading about electronic effects in organic compounds, and I found the explanation that carboxylic acids are weakening as their number of carbon atoms increase.

As a trend is usually a linear fit through experimental values it does neither mean that there are no minor variations between the values nor that there is a constant rise between values but only that one can see a difference between earlier and later values of that measured property.

And besides all the answers on the actual influence of the longer alkyl chain on the acidity of the carboxylic group there are no big differences between the acidities for those small alkanoic acids between chain lengths of two to ten carbons.

However, there is a small overall trend $\left(+0.02~\mathrm{pK_a}\right)$ which can be seen in the following graph. 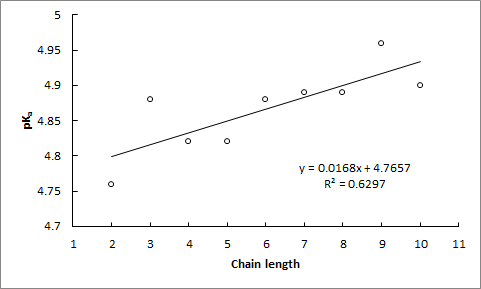 So one is a little bit stronger than the other but it is not very much.

One could start to argue why exactly those two differ "so much" in strength but looking at those nine values above and the "noise" around the trend I guess that makes no sense.

The mesomeric effect requires a conjugated system of pi bonds. We do not have that in this situation: both propanoic and butanoic acids have an "isolated" carboxylic acid group that bonded to a saturated carbon and is not conjugated with anything.

One could make an argument that the difference in acidity is a result of the solvation energy difference between propanoic acid and the propanoate ion on one hand, and between butanoic acid and butanoate ion (perhaps greater) on the other.

18
Comparing acidities of substituted and aromatic carboxylic acids
10
Why can the lone pair not align with the phenyl moiety in 2,6-xylidine?
1
Why does butanoic acid have a higher boiling point than isobutyric acid?
1
Which is more acidic acetic acid or propanoic acid?
2
Why boron trihydride is weaker lewis acid than boron tribromide and boron tri-iodide?
9
Why is carbonic acid a weaker acid than acetic acid?
8
Why is d3-acetic acid more acidic than acetic acid?