The orbital interaction between the 2 butadiene units in spiro[4.4]nonatetraene is referred to as spiroconjugation. Note that the 2 rings attached through the common or spiro carbon are perpendicular to one another. Each cyclopentadiene ring contains a 1,3-butadiene unit. In the figure below, I've drawn in the molecular orbitals for the highest occupied molecular orbital ($\Psi_2$) of 1,3-butadiene.

It is a bit easier to analyze the situation using a Newman projection. In the Newman projection on the right I only show the 4 carbons (and their P-orbitals) that are directly attached to the central spiro carbon, since these atoms and orbitals are the only ones close enough to interact between one ring and the other. Notice how all of the through space interactions between nearby P-orbitals is stabilizing (indicated by arrows). That is, all of the overlaps are construcive (bonding}, either + + or - -. This indicates that $\Psi_2$ has the correct symmetry to interact with itself. Look at the molecular orbitals (MO) for 1,3-butadiene and convince yourself that $\Psi_1$ and $\Psi_3$ do not have the appropriate symmetry to interact with $\Psi_2$ (e.g. there are no + + overlaps between the carbons attached to the spiro carbon, only + - overlaps that cancel out; and energetically, $\Psi_4$ is to far away to interact. When the two $\Psi_2$ MOs interact, as usual, new MOs are formed; one is stabilized and one is destabilized and the destabilized orbital is always slightly more destabilized than the stabilized orbital is stabilized. The net result in this case is that spiroconjugation produces a (small) net destabilization and the molecule is termed antiaromatic in a spiroconjugation sense.

On the other hand, consider spiro[2.4]heptatriene. Now the only interaction of consequence (e.g. where the interactions are of the ++ or -- type rather than +-; said differently, only $\Psi_2$ of the diene and $\ce{\pi_^{*}}$ of the ethylene have the appropriate symmetry to interact) occurs between the HOMO of the diene ($\Psi_2$) and the LUMO of the ethylene in the 3-membered ring. 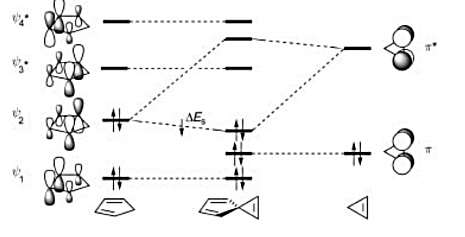 In this case, as the orbital mixing diagram indicates, there is a net stabilization of the pi electrons that results. Spiro[2.4]heptatriene is said to be aromatic.

Spiroconjugated compounds containing 4n+2 pi electrons will turn out to be stabilized (aromatic), while those with 4n pi electrons will be destabilized (antiaromatic). Remember, these effects are small, but they can be seen in UV spectral shifts and even in solvolysis reaction rates of related compounds. If you google spiroconjugation or spiroaromaticity you can find links to the original articles that appeared in the late 60's, as well as some more recent information on the subject.

Not the answer you're looking for? Browse other questions tagged organic-chemistry molecular-orbital-theory aromatic-compounds or ask your own question.

47
Is buckminsterfullerene aromatic?
25
How does the cyclopropyl group influence conjugation and aromaticity?