Studying biochemistry I noticed that equilibrium is reached for K and Na separately (not taking into account electric potential), as would be the case I assume for any molecule or atom. This is of course entropy.

Eg: My understanding is, you have two types of atoms, and a membrane separating them, with different concentrations on each side. Each atom will reach equilibrium with itself across the membrane, as if the other type of atom doesn't exist (barring the influence of charge).

Why is it that, for instance, a K atom is so keen to reach equilibrium with another K atom in an area of lower concentration, and yet seemingly ignores the Na, even if the Na is in high concentration where the K is low? Both Na and K still have the same charge, and would also collide with each other I imagine? Why do identical atoms behave like this but non-identical ones with very similar properties don't?

My understanding was incorrect regarding K and Na having separate forces. The two atoms seem to be treated the same, except for selective permeability.

I'm still not understanding why the two atoms have separate gradient potentials, if they can be treated as the same. I made the following images to illustrate my point a little clearer.

First, the assumption: The main assumption behind all this is that, in answering this question, we can treat Na and K as being the same. They are effectively two marbles with identical physical and chemical properties, just with different colours. This is what I have come to understand based upon the answer by orthocrestol.

The cell on the left has a -70mv potential energy compared to the right compartment, caused by invisible negative ions which will always remain on the left side. 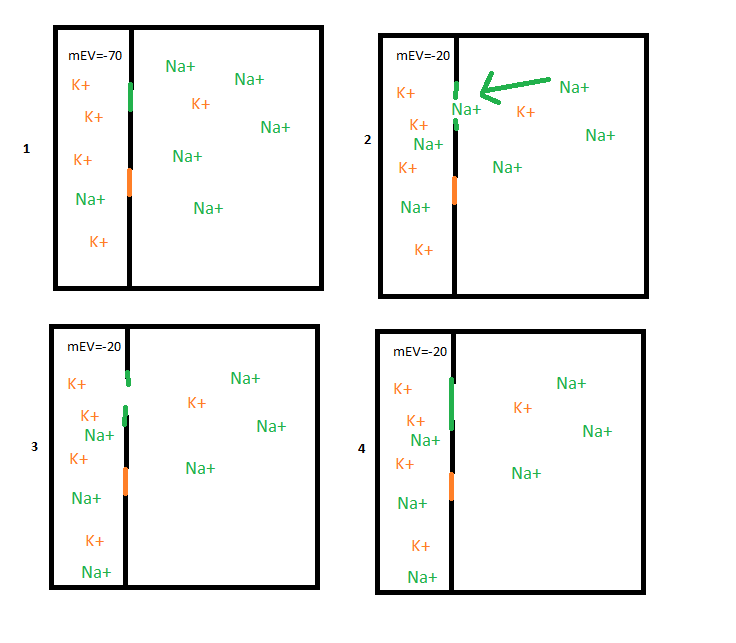 All that has been summarized by the discussed assumption is seen in figure 1.

Now in figure 2, we open the selective channel for Na. Since Na has a gradient potential, and there is also a potential difference, the positive Na flows into the left hand compartment.

In figure 3, an equilibrium is reached at an arbitrary value of -20mv. On average, no more Na will move to the left or the right, it's at equilibrium.

Figure 4, channels closed. Now this is where my understanding ends.

Apparently now, from what I gather, in figure 5 if we open the selective channel for orange (K+), since K+ has a gradient potential, it moves to the right. In the process, it takes its positive charge with it and restores more or less the original potential difference of -70mV on the left hand side.

But, if this is what happens, this must surely invalidate the marble analogy of the two atoms being the same. Because if they're the same, then whether we open the Na channel (which is already at equilibrium) or the K channel should make no difference, because once gain, they're the same atom with a different colour (except for being separately permeable via their selective channels).

The only difference that should be apparent is that if we leave both channels open, then the colours will eventually reach an equilibrium on both sides. But if an equilibrium is already reached for the charge (which it has in figures 3 and 4), I'm failing to grasp how opening then closing a different channel suddenly causes that equilibrium to change (as in figure 5 and 6). The explanation is the K potential gradient, but this is still the same marble as Na is it not? How come the potential difference changes?

Please direct me where my thinking has gone wrong, or if this is what even happens. And if it is, how is this possible? Many thanks.

This answer has been edited quite a bit. New additions are put in blockquotes.

To avoid any potential (pun not intended) confusion, let me make one thing clear before I start: Any mention of "potential" in this answer refers to an electric potential, not a chemical potential. The definition of electric potential can be found here on Wikipedia.

The inside and the outside of the neuron is separated by a cell membrane, which is selectively permeable to ions such as $\ce{Na+}$, $\ce{K+}$, $\ce{Ca^2+}$, and $\ce{Cl-}$. Of these four, sodium and potassium ions are the most important as they are directly involved in depolarisation and repolarisation when an action potential is generated.

At this stage, we have to consider the two factors that influence the diffusion of $\ce{Na+}$:

Therefore $\ce{K+}$ leaves the cell, leading to repolarisation. There are further events such as hyperpolarisation and the refractory period, but they are not relevant to this discussion. After all this is said and done, the concentration gradients of both $\ce{Na+}$ and $\ce{K+}$ are not the same as they were at the very start of this discussion. They are restored by the $\ce{Na+}$/$\ce{K+}$ pump.

The most important thing to takeaway from this is that the diffusion of species X across a membrane is affected by two things: 1) the concentration gradient of X; 2) the potential difference across the membrane, if and only if X is a charged species. Other concentration gradients of other species, such as Y, Z etc. do not directly affect the diffusion of species X unless they contribute to the potential difference.

I think the marble analogy is inherently flawed in that there is no real analogous concept to a potential difference. You could modify it to have some kind of analogous concept, but in my opinion it wouldn't make sense any more.

Each atom does its own diffusion across the membrane. There is a probability that a $\ce{K+}$ or $\ce{Na+}$ ion will move in the "forward" or the "reverse" direction. The probability of getting through the membrane may differ between the types of ions (e.g. if the membrane pores allow one species through more easily than another because of ionic size), but, barring any external force, eventually each type of ion should come into equilibrium, with as many going forward as backward.

Imagine a box of marbles of two colors, with a partial separator between, and that the box is shaken. It is simple chance that a marble crosses the separator, and if many marbles of one color are on one side, there are fewer to migrate backward from the other.

See this online demo of diffusion across a semipermeable membrane.

4
What is the formula for migration rate of DNA in agarose gel electrophoresis?
12
How can a protein folding transition state have zero lifetime?
2
Why don't ions have one equilibrium potential? (Nernst equation)
3
Monosaccharides configurations (alpha beta, D L) identification
6
What is the precise definition of Ramachandran angles?
1
How can I model cellular membranes in terms of topology?
5
How do enzymes affect a reaction's equilibrium?