I would like to know if this molecule has ever been synthesized, if not why not, and what would its IUPAC name be? 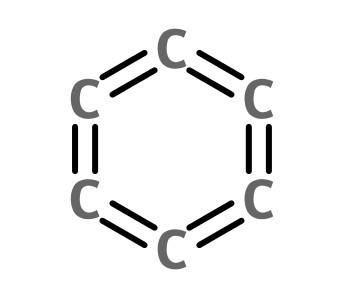 There are several monocyclic $\ce{C6}$ isomers. Three of them are pictured below

While all of the carbons in these molecules are (more or less) $\ce{sp}$ hybridized, the molecules are different from one another due to differences in bond lengths and bond angles. For example, all of the bonds in A are exactly the same length due to symmetry, whereas the triple bonds in B will be shorter than the adjacent single bonds. Therefore, A-C are isomers, not resonance structures.

Ideally the atoms attached to an $\ce{sp}$ hybridized carbon form a linear arrangement (180° bond angle) with the central $\ce{sp}$ carbon, acetylene and the central carbon in allene serve as examples. 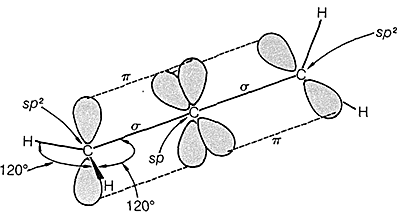 However in the cyclic $\ce{C6}$ compounds A-C, the $\ce{sp}$ hybridized carbons are forced by the ring to deviate from the desired 180° arrangement to something down around 120°. Therefore, quite a bit of angle strain is incorporated into A-C making them extremely strained and unavailable through laboratory preparation to date.

As mentioned above, A-C have different bond lengths and bond angles therefore they are isomers, not resonance structures. A fascinating question is,

This is a type of cyclocarbon, specifically Benzotriyne. Processes using it or synthesizing it have been described in Towards the total synthesis of cyclo[n]carbons and the generation of cyclo[6]carbon, among others.

It has not yet been successfully synthesized. Wikipedia states (without citations) that

Recent investigations have concluded that benzotriyne is unlikely to exist due to the large angle strain.

Not the answer you're looking for? Browse other questions tagged organic-chemistry bond nomenclature or ask your own question.

13
How small is the smallest known carbon ring containing only double bonds?
7
Do allenes form rings?
0
Can't you form a ring from almost any number of sides from carbon?

7
What do the numbers in the preferred IUPAC name for ascorbic acid mean?
5
Carbon with two double bonds and oxygen name
3
What would carbon-oxygen polymer be called?
7
How to name this benzene alcohol?
0
Nomenclature of multiple double bonds?
1
Naming CHCl(NH2)OH
10
Naming of asymmetric organic molecules with two nitroxides
8
Does this C17H28 isomer exist?