I was studying pinacol pinacolone reaction when I came across this. I believe the hydrogen cation will attack the hydroxyl group of carbon attached to two ethyl groups (since this carbocation is more stable due to the inductive effect), then methyl group will migrate and hence we get 3-ethyl-3-methylpentan-2-one, but the book says the answer is 2-ethyl-2-methylpentan-3-one. Is the answer in the book wrong or I am making a conceptual mistake?

Edit: This answer is based on a typo in the original question referring to a different starting compound than the OP intended.

A quick analysis of this reaction gives me the following: 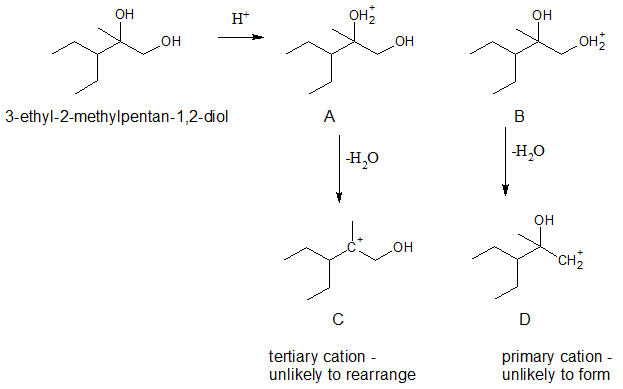 3-ethyl-2-methylpentan-1,2-diol can be protonated by acid to produce cation A or B. Either of these cations can lose water to form a carbocation

Pinacol rearrangement from cation A

A pinacol rearrangement from cation A through carbocation C forms an aldehyde: 3-ethyl-2-methylpentanal.

Pinacol rearrangement from cation B

Having established that carbocation D is unlikely to form, we might suspect no rearrangement, but the rearrangement can occur in a concerted fashion with the loss of water. The end result is a ketone: 4-ethyl-3-hexanone. These kinds of concerted rearrangements to avoid primary cations are also known to occur in Friedel-Crafts reactions.

Neither product seems to match what you provided as the book's answer. Is it possible you miss-named the product?

Which product is more likely the major product?

Rather than tell you, I will give you a hint:

One rearrangement produces a thermodynamically more stable cation than the other.

With the correct starting compound, 3-ethyl-2-methylpentan-2,3-diol, predicting the product is tough! Here is the reaction scheme for this compound:

Without experimental evidence, I would have trouble choosing between C and F. If I had to choose, my first instinct would be F because it involved the methyl shift instead of the ethyl shift. Methyl shifts happen faster (methyl is smaller) than ethyl shifts.

My reasoning (and probably yours) is wrong, and here is why. We can only consider methyl > ethyl from the same carbocation. For example, in the following rearrangement:

In the rearrangment step at the end of the sequence, the methyl group is more likely to move than the ethyl group. We can make this comparison here because the pathway is identical up until the rearrangement.

In your reaction, the pathways toward the generation of the carbocations are not equivalent.

I'll give you a hint: Have you considered steric factors?

6
Determination of products in reactions involving carbocation rearrangement?
28
Which carbocation is more stable, the ethyl- or 1-propyl-carbocation?
17
Rearrangement of a bicyclic dienone under acidic conditions
2
How is more than one pinacolone is possible?
1
Chair conformations of cyclohexane with two substituents
0
Why do certain signals in proton NMR experience extensive splitting despite only having 1 neighbour?
7
Is there any specific conditions for Neighbouring group participation?