Why does hyperconjugation help for ring cleavage? 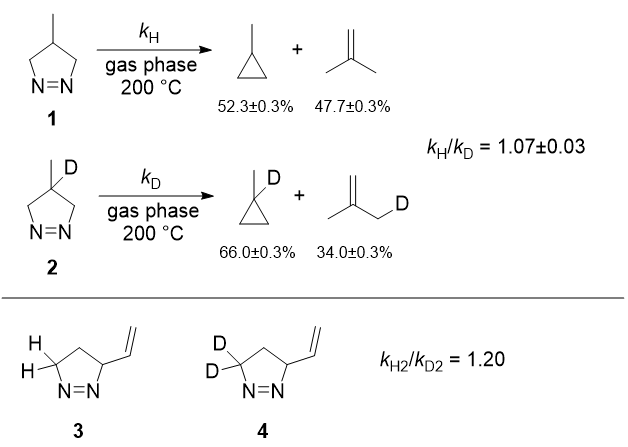 The question was to rationalize it the ring cleavage happens concerted or non-concerted.

The papers "The Mechanism of the Thermal Decomposition of 1-Pyrazolines and Its Relationship to Cyclopropane Isomerizations" (Crawford 1965/1966; Original papers: here and here) have shown the loss of $\ce{N_2}$ is supposed to be concerted.

I think the C-C/C-D(H) bonds of the central position of the ring are involved in a hyperconjugative fashion, so its hybridization does matter. The out-of-phase linear combination of the $\sigma^\star$ orbitals looks like a p-orbital, therefore I expect a through-space interaction.

I've drawn the the out-of-phase combination as following:

Now my problem is, that I don't see why the out-of-phase combination is involved in hyperconjugation, because I think the overlap is best in the educt, less good in the transition state and has no orbital overlap to the product because the out-of-phase $p$ orbital is kind of perpendicular to the $sp$ Walsh orbitals which lies in the C-C-C plane.

How can hyperconjugation help to understand the observed kinetic isotope effect results?

Do you have any ideas?

This is a bit late, but my instinct tells me you form the 1,3 diradical. The fusion to a cyclopropane seems pretty reasonable. The alkene is formed from a 1,2-hydrogen atom shift (I admit, this is a strange abstraction), but the formation of the alkene (and the fact that this is flash vacuum pyrolysis) make me think this is not completely unreasonable. Since the mechanism involves breaking the H/D bond, you would expect some selectivity 1:1 versus 2:1. The fact that there is essentially no primary KIE observed is consistent with diradical formation as the r.d.s.

The other reaction, I suspect, forms the cyclopentene with the deuterium substitution on at the 3- position. The secondary KIE would be consistent with diradical formation.