Old papers on chemical structures often contained "3D" renderings of the molecule by using 2 2D images and requiring the reader to go cross-eyed to get the 3D image. A good example I recently found was figure 2 from Carter and Kraut, 1974, which I copied below: 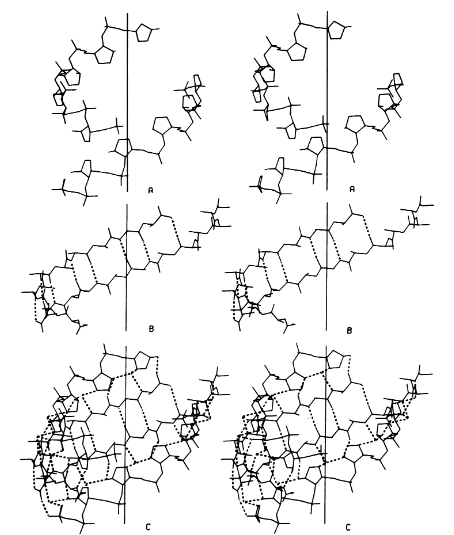 However, this paper is from 1974, which feels like ancient history for 3D graphics. Since I have unrelated interests in molecular biology and 3D graphics, I was wondering how they produced these images so long ago, and if the code to produce them is floating around somewhere. I know there are programs to do it for me because I have seen modern images of proteins that do this, I want the code because I might try to build it into my crappy 3D rendering project that I'm wasting too much time on.

Created in FORTRAN by Carroll K. Johnson, of the Oak Ridge National Laboratory (ORNL), and first released in 1965, ORTEP (Oak Ridge Thermal-Ellipsoid Plot Program) rapidly became a favorite of crystallographers and protein crystallographers to produce illustrations of structures for conference presentations and publications. A key strength of ORTEP was its capacity to generate stereoscopic images automatically.

For source of above and more information see: History of Visualization of Biological Macromolecules

Not the answer you're looking for? Browse other questions tagged structural-formula history-of-chemistry or ask your own question.

21
How were elements and molecular formulæ determined in the old days?
8
How were the elements discovered before modern technology?
3
How could scientists produce accurate chemical structures before they could capture images of molecules?
2
How were the first molecular formulas determined?
7
How can we recreate old pharaos' perfumes?
8
How were urolithins discovered and named?
6
ChemDraw: how to change the default aromatic ring style for drawing from SMILES
16
Why were quasicrystals initially so controversial?